Atlanta rapper Slim Dunkin was killed over candy, according to reports. A suspect has turned himself into police. 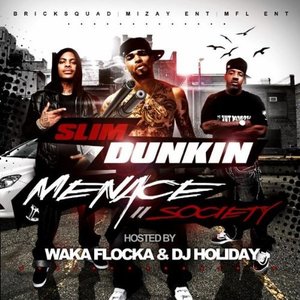 Before today, Vinson Hardimon, AKA Young Vito, had long dreadlocks, a mustache and a goatee. But he was short-haired and clean shaven as he turned himself in Monday for the murder of Atlanta hip-hop star Slim Dunkin, according to a report in the Atlanta Journal Constitution.

Slim Dunkin, AKA Mario Hamilton, was killed on Dec. 16 after he was shot in the chest in a dispute over candy during a video shoot in an Atlanta recording studio. Police say that Hardimon was the trigger man and they were looking for him when he turned himself in. It also appeared that his life was in danger, too, and the change in his appearance suggests that he felt he was a possible target for retribution.

He’s been the subject of threatening postings on his Facebook page.

“May God watch your soul coz you got a demon lurking around you,” read one posting.

Hardimon, who had been arrested four times in the past, was one of 30 people in the studio at the time of the shooting.

Flocka, who was a childhood friend of Dunkin’s, has been tweeting memorials about his pal since the shooting.

“Truly great friends are hard to find, difficult to leave and impossible to forget,” tweeted Flocka on Dec. 17, and he later posted “Damn, I feel dead” and “I’m lost.”

He also referred to Dunkin as his right hand several times.