Dot-Marie Jones, known to most as coach Beiste from Glee, knows a thing or two about being bullied. That’s why the actress and arm-wrestling champ is promoting the sale of one particular children’s book. 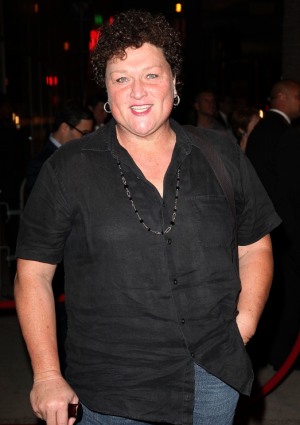 Dot-Marie Jones is out to put an end to childhood bullies. The 47-year-old actress has put memories of taunting and teasing to good use by helping to promote the children’s book Just Like You.

Dot-Marie Jones, who plays coach Beiste on the hit show Glee, shared of her bullying past, “I grew really fast… seven inches in six months. Kids would say comments like, ‘You’re so tall, you should have been a man. Are you a man? Are you a woman?’ It still strikes a nerve.”

Speaking to People she added, “Kids don’t realize how powerful words are.”

At 6 feet 4 inches tall Dot-Marie Jones continues to tower over many, but has made a career of making her unusual stature work in her favor. In high school she was a champion weight lifter and was named female athlete of the year. She has also won 15 arm wrestling world championships.

Discovered at a bodybuilding competition by Shirley Eson from the television show American Gladiators, Dot-Marie Jones auditioned for and won one of the few female roles in the film Knights and Warriors. She later turned down an offer to enter the professional wrestling ring because, she said, it was “too fakey.”

It was during a supermarket encounter that Jones asked Glee co-creator Ryan Murphy for a role on the show. He obliged, and coach Shannon Beiste was created in season two.

Though embracing her differences has made Dot-Marie Jones famous, she’s encouraging children to focus on their similarities. Just Like You is a book about a deaf field mouse named Henry and Boris, a spider with a bad leg. The pair often get bullied, but stick together no matter what.

“It doesn’t matter what your differences are,” explained Dot-Marie Jones. “You have to embrace what your likenesses are, and that we’re all just like you.”

One hundred percent of the profits from the book, sold on the Just Like You Foundation website, will be donated to benefit people with disabilities.