Kim Zolciak from The Real Housewives of Atlanta talks about her plans to partner with Ciroc Ultra Premium Vodka to welcome 2012 in New York City, dishes on her upcoming song, new book, recent marriage to NFL football player Kroy Biermann and the birth of their son KJ. 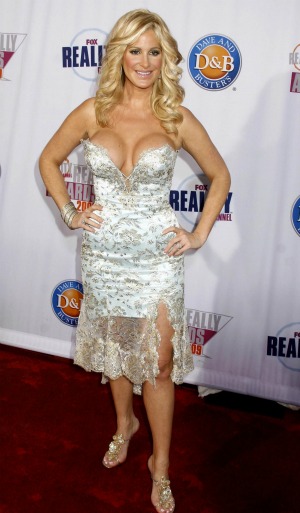 Kim Zolciak, one of the stars of Bravo’s hit reality TV series The Real Housewives of Atlanta will join Ciroc Ultra Premium Vodka to ring in the New Year.

Zolciak has had quite a year, marrying NFL Falcons player Kroy Biermann, giving birth to her first son KJ, recording a new song, writing a soon to be released book and filming a TV spin-off series. The housewife and mother of three will be spending New Year’s Eve in the Big Apple in conjunction with the fourth annual Ciroc Safe Rides program.

On Dec. 31, designated Ciroc brand ambassadors will distribute thousands of “Safe Rides” cards to adult consumers in major metropolitan cities across the country. While the 33-year-old had other plans for the holiday evening, she says the company’s message is something believes very strongly in herself.

“I don’t like leaving my son, I only had to leave him twice since he’s been born, thankfully, overnight, so I was going to hang out at home this New Year’s. However, I think Ciroc and how they’re running their program this New Year’s — with passing out these credit cards with $15 on them for people to get a ride home and the way they’re promoting it — it’s okay to have a drink and enjoy New Year’s Eve, but let’s do it safe. And that’s really why I made the decision to go to New Year’s Eve in New York City and be a part of the Ciroc program.”

The holiday is one of the biggest nights for partying, but Zolciak says people need to have a plan, “There’s no excuse why anybody should be drinking and driving,” she explains. Adding, “I definitely think people should have rides arranged prior to going out and you should have a plan for that evening so you can enjoy yourself and be safe doing it.”

Check out: Real Housewives of Atlanta’s NeNe Leakes on Glee >>

Season four of The Real Housewives of Atlanta is currently airing on Bravo. Zolciak says this time around she didn’t have time to get caught up in all of the drama while focusing on her children and Biermann, her new husband who plays for the Atlanta Falcons. “They go to camp for a month — Kroy was at camp the whole month of August — so I had a 2-month-old and had to get these girls into a new school district, so I wasn’t so involved this season with events as I usually am. And I didn’t attend a lot of events… It was basically more or less all about my family and it was so nice — I’m just really in a different place.”

In addition to being an Atlanta housewife on Bravo, Zolciak will be appearing in her own television spin-off series, Don’t Be Tardy For The Wedding.

The “Tardy for the Party” singer also has a new song due out in February and is excited to get feedback from fans about her new sound. “I can’t tell you too much about it but I do have a new song coming out and I’m really looking forward to that because it’s totally different than what I’ve done.”

She even has a new book coming out, They Call Me A Gold-digger, You Just Want What I Have, “I worked on that during my pregnancy and just finished wrapping that up, so that will be out early next year.”

Zolciak is looking forward to 2012 so she can slow down her work-pace, “Now, we’re at a place where I’m off; I’m able to enjoy my family the next few months and kind of relax!”