Bachelor winner and reality show groupie Vienna Girardi caused quite a scene when she walked off the set of Relationship Rehab when producers brought out her ex-boyfriend. Was her tantrum for real — or made for TV? 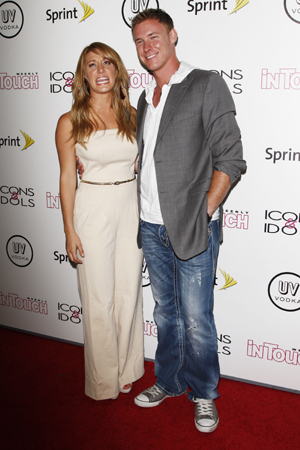 Vienna Girardi was expecting to work out her issues with her ex-boyfriend Kasey Kahl on the new VH1 reality show Relationship Rehab, but what she was not expecting was a visit from her ex Lee Smith.

Sources tell TMZ that once Smith came out, Vienna had an “emotional breakdown,” ripped off her microphone and stormed off set. She screamed at the producers that she “hates” them and never returned back to the show.

Who is Lee Smith? He was the ex that Vienna was reportedly hooking up with while she was still engaged to Jake Pavelka.

Sexy emails between the couple were leaked and Lee told the press that they had hooked up 10 days before she and Jake split. In fact, Lee revealed all the sexy details of their relationship — which could be why Vienna was furious when she saw him.

“She told me, ‘I couldn’t see myself having a child with anyone but you,'” Lee said. “And then I asked her how she could tell me this while she was engaged to someone else. And she told me, ‘It’s not going to work out. We don’t even have sex anymore.'”

Bachelor Pad couple Vienna and Kahl broke up this fall, but were appearing on the new VH1 reality show to try to save their relationship, along with other celeb couples including Linda Hogan and Charlie Hill and DMX and his wife.

The show has finished shooting and Vienna was a no-show for remainder of the shoot, leaving many wondering if she violated her contract by leaving the show early.

“Too funny. Watch and see what really happens,” Vienna wrote on Twitter, as she re-tweeted the story about her storming off set.

What do you think? Was the outburst for real — or made for TV?