Dick Clark has been part of helping many of us ring in the new year for as long as we can remember and now it’s time to honor the man who makes New Year’s Eve so special. 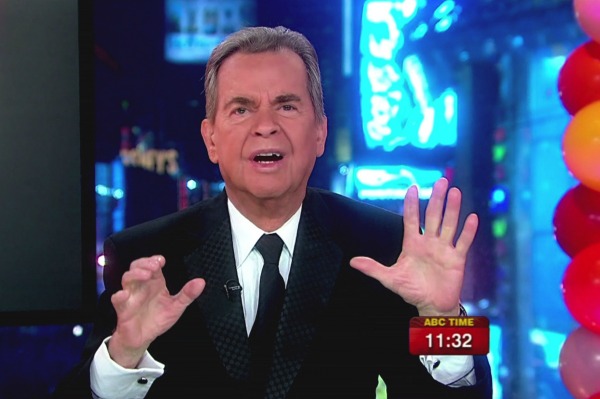 Okay, not every single person does one of the above for their big NYE plans, but the fact still remains, Dick Clark is celebrating 40 years of rockin’ the holiday with New Year’s Rockin’ Eve: The 40th Anniversary Party.

Here’s everything you need to know about ABC and Dick Clark’s big night: New Year’s Rockin’ Eve: The 40th Anniversary Party will be hosted from Times Square and Los Angeles according to the ABC website.

Fergie will return to emcee the Los Angeles parts of the night, while Jenny McCarthy is on hand to help from New York.

The special will take a look back at four decades of special moments.

Check out how to look hot for NYE >>

The two-hour party will be the appetizer to Dick Clark’s New Year’s Rockin’ Eve With Ryan Seacrest, during which Clark will be alongside Seacrest for.

Ryan Seacrest will be followed by the news and then the festivities will pick back up with the main countdown show at 11:30 p.m. EST.

With a lineup boasting Lady Gaga, The Band Perry, Justin Bieber and Nicki Minaj, it’s clear to see how the times have changed. Check out a preview…

Dick Clark said in a release from ABC.com, “It hardly seems possible that we began telecasting New Year’s Rockin’ Eve 40 years ago. Armed with just a couple of cameras and a skeleton crew, my wife and I stood atop a Times Square building and watched the thousands of happy celebrants in Times Square.”

He continued, “The army of talent we had join us over the years has truly been outstanding, and this year we top it off with an appearance by Lady Gaga. New Year’s Rockin’ Eve 2012 promises to be one of the most exciting ever, and I’m proud to be part of the team.”

This is going to be a huge night and we cant’ wait to watch the ball drop in this time-honored tradition.

Will you be rockin’ New Year’s Eve with Dick Clark?