“Nothing Compares 2” Sinéad O’Connor’s inability to commit to marriage. The ’80s hitmaker’s fourth trip down the aisle has ended in disaster. Just days after Christmas, O’Connor has announced her plans to divorce Barry Herridge, the Irish counselor she married in Las Vegas earlier this month. 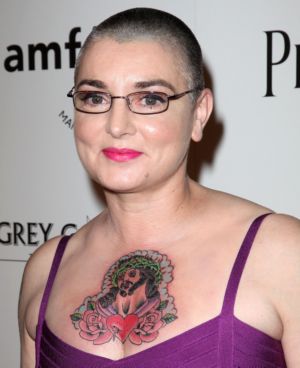 Stick a fork in ’em! Sinéad O’Connor is marching to divorce court after a whopping 18 days of marriage.

Way to give Kim Kardashian a run for her Manolos, girl.

O’Connor married beau Barry Herridge, a counselor, at a Las Vegas drive-thru wedding chapel on Dec. 8 — which was also the star’s 45th birthday.

It seems that the fourth time really wasn’t the charm for the thrice-divorced Irish-born chart-topper — who has left fans distressed over her increasingly bizarre behavior in recent months.

In August, the outspoken musician penned a racy blog launching a search for a “very sweet sex-starved man.” Just a month later, Sinéad fans rallied a call to arms when the “I Want Your (Hands on Me)” songstress posted a series of suicidal messages on her now-defunct Twitter page.

Sinéad later assured fans she had no plans to take her own life and wrote an open letter discouraging suicide.

Now O’Connor says Herridge, the life partner she met and married in the time it takes some people to digest calamari, jumped ship on their union after “certain people in his life” alerted him of press reports about her erratic behavior.

“Within 3 [sic] hours of the ceremony being over the marriage was kyboshed by the behavior of certain people in my husband’s life,” O’Connor, a mother of three, wrote in a blog posting to her Official Website on Monday night.

The fact that the bride made a newlywed Barry ride shotgun while she scoured the Nevada ghetto for marijuana certainly didn’t help matters.

“And also by a bit of a wild ride i [sic] took us on looking for a bit of a smoke of weed for me wedding night as I don’t drink,” she added. “My husband was enormously wounded and very badly effected by that experience and also by the attitude of those close to him toward our marriage. It became apparent to me that if he were to stay with me he would be losing too much to bear.”