Playboy boss Hugh Hefner is in the middle of a dogfight with ex-fiancée Crystal Harris. Puppy prenup, anyone?

There’s a doggone custody battle brewing over at the Playboy Mansion. 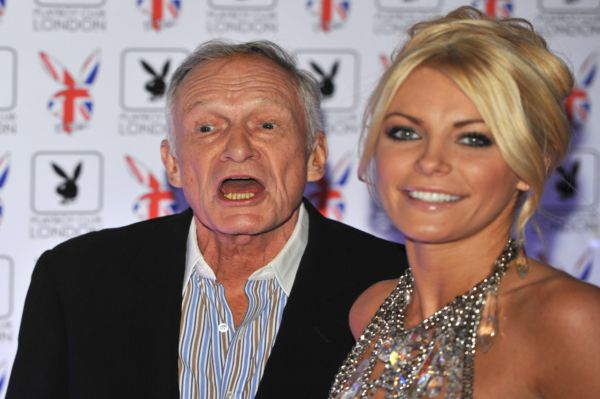 Crystal Harris is the so-called runaway bride who narrowly escaped becoming the world’s third Mrs. Hugh Hefner when she left the Playboy mag founder single and heartbroken only days before their scheduled June wedding.

When she made her getaway, Harris was careful to ensure that she brought a few trinkets along for the road.

And by a few trinkets we mean her $90,000 engagement ring, a tricked-out Bentley and one very special pooch.

Ah — which brings us to the source of contention between the former couple.

The exes are at odds over custody of Charlie, the doe-eyed Cavalier King Charles Spaniel they once shared. Although Harris previously claimed Hef let her keep the dog following their split, the Girls Next Door boss says they’re still working out where the dog will stay permanently.

“We both love the puppy,” the magazine magnate told People this week. “I told her if she wants to keep the ring and the Bentley, then maybe I can keep the puppy. I [hope] we will work it out.”

Perhaps next time a puppy prenup might be in order?

Crystal’s staying mum about the custody spat over Charlie. But now that she’s swapped her Bunny ears for a life away from Casa de Playboy, the former Playmate is being quite vocal about dishing the deets on her sex life (or lack thereof) with the world’s oldest living bachelor (Guinness World Record pending, of course).

Harris, 25, swung by SiriusXM’s Howard Stern Show earlier this year, where she revealed that sex with the 85-year-old Playboy tycoon lasted “like two seconds.”

Harris also made the surprising claim that the former couple only had sex once.