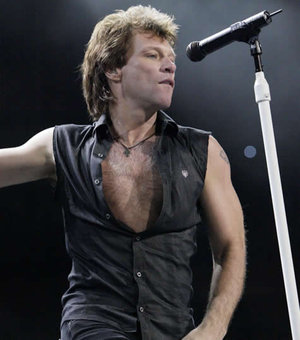 A Philadelphia heavy metal musician is claiming to have started the Jon Bon Jovi death hoax of last week and the hoaxer is singing a new tune: I’m sorry.

Jeffrey Goho of the Philly area band Minutia started the rumor because he felt Jon Bon Jovi’s non-musical pursuits — things like the Advil commercial — were taking time way from the things that really mattered. Goho “felt as if Jon Bon Jovi had lost site [sic] of the true reason he became a household name… his musical contributions,” according to the press release.

Hmm, we suppose Goho wasn’t one of the 1.5 million people who saw the more than 50 Bon Jovi concerts around the world in 2011.

Goho posted a sloppy press release on a WordPress blogging site stating that Jon Bon Jovi had died after he was found in a coma in an Asbury Park hotel on Dec. 19. The bad intel went viral and was refuted by Jon Bon Jovi’s spokesman and later by the rocker, who posted a pic of himself holding a sign that read “Heaven looks a lot like New Jersey.” Bon Jovi made several references to the death hoax during the Hope Concert V in Red Bank, New Jersey, which took place the evening of Dec. 19.

Goho, looking back, regrets spreading the rumor, according to a press release.

“I never thought the rumors would spread so rapidly,” Goho said. “I am truly sorry for any and all damage that I may have caused Jon and his family. Furthermore, I can only hope that he continues to bring prosperity to the Philadelphia region and surrounding areas.”

However, Goho may have had another reason for fessing up. His email was spammed following the hoax, he said in a posting on his Facebook page. He also referred to the hoax as his latest “stunt.”

“Please stop sending attached hate mail to my fellow band members,” Goho posted on his Facebook page. “They are in no way involved.”

Jon Bon Jovi is involved in several charities, including Habitat for Humanity, he’s a co-owner of the Philadelphia Soul arena football, a member of the White House Council for Community Solutions and he just opened the Soul Kitchen community restaurant in Red Bank.