Hunger Games fever is at an all-time high. Lionsgate and Universal Records have revealed the artists who’ll appear on the film’s upcoming soundtrack. The album will include original music from Taylor Swift, Arcade Fire and many more! 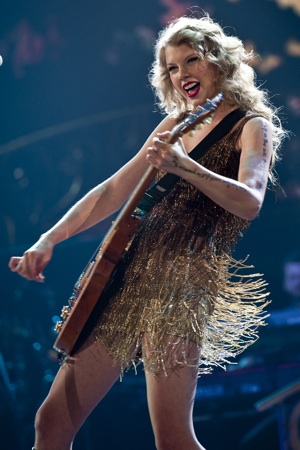 One of 2012’s most anticipated films — The Hunger Games, is just a few months away. In preparation, Lionsgate and Universal Republic Records have unveiled the stars of its rockin’ soundtrack.

According to UPI, Taylor Swift, The Civil Wars, Arcade Fire and The Decemberists will all appear on the album. If that wasn’t enough, the soundtrack will be produced by Oscar-winner T Bone Burnett, who previously worked on Crazy Heart.

In an official statement he said, “We are thrilled to have such a hauntingly beautiful companion album taking shape — T Bone is working with these artists to create something truly incredible and unique that fits perfectly with the powerful themes of the books and the film.”

Universal’s Monte Lipman also chimed in with some encouraging words. “The Hunger Games is a groundbreaking series that is nothing short of brilliant. Universal Republic is delighted to forge a creative alliance with Lionsgate to participate in this franchise’s undeniable legacy.”

The first single off The Hunger Games soundtrack is performed by Taylor Swift and entitled, “Safe and Sound.” The song is currently available on iTunes.

The Hunger Games is based on the popular young adult novel from Suzanne Collins. It centers on a group of girls and boys, between the ages of 12 – 18, who are forced to particpate in a fight to the death competition. The cast includes Jennifer Lawrence, Josh Hutcherson and Liam Hemsworth.

The Hunger Games opens in theaters March 23, while the soundtrack debuts earlier that month.