Rock fans, are you ready for pretty much the awesomest holiday gift ever? Brace yourselves, and try not to choke on your egg nog. Van Halen is back!

Van Halen is back with David Lee Roth, and a new album and tour! 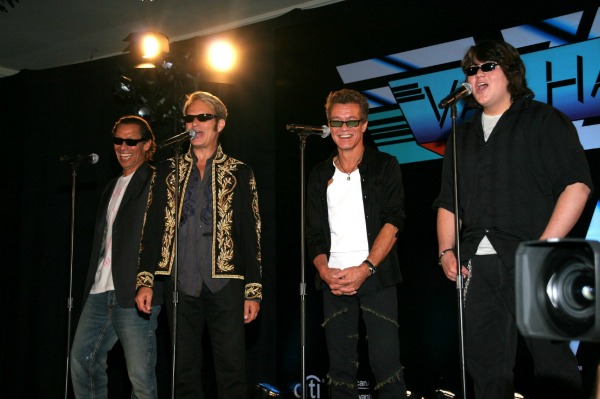 The iconic hard rock band is reconvening with their original lead singer to tour in 2012 — and while they have not confirmed this part yet, rumor has it that they cut a deal with Interscope for their first studio album since 1998. The disc would mark the first recorded appearance of Eddie Van Halen‘s son Wolfgang Van Halen, who replaced original bassist Michael Anthony in 2007. It would also be the first album with Roth in the lead vocal spot since 1984.

Van Halen announced the news with a series of videos on their YouTube and official web pages featuring new performance footage of the band with Roth, backed by the studio versions of “Jump,” “Panama” and “Hot for Teacher.”

A news crawl at the bottom of each video announced, “Van Halen on tour 2012” and “First tickets on sale January 10.”

Tour stops and concert dates have yet to be announced.

The band hinted at the big news in November when they released a photo of themselves and manager Irving Azoff with Interscope executives with the caption, “Captured at an undisclosed venue in Los Angeles. Want to know why? Stay tuned…”

That undisclosed location was actually The Roxy in Los Angeles.

Back in 2008, Eddie Van Halen told Guitar World magazine, “I’ll be making music ’til the day I die. I’ve done all kinds of stuff, and more is coming. I can’t tell you exactly when right now. Wolfgang is in the 12th grade and he needs to graduate first. Then I’m getting married in June. We’ll pick it up after that.” Sounds like he wasn’t lying.