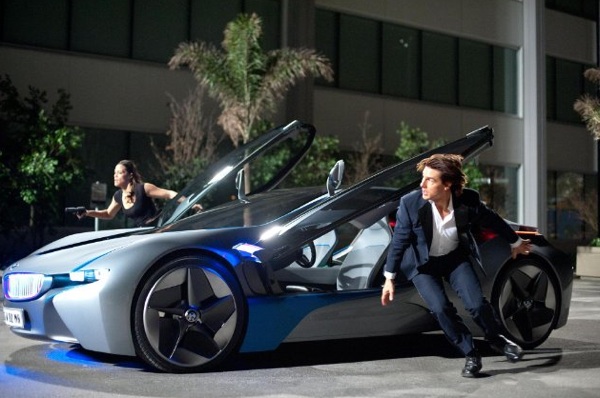 The action-packed spy thriller Mission: Impossible — Ghost Protocol rolls in at number one for the last big holiday weekend of 2011. Tom Cruise stars as the unstoppable Ethan Hunt on the fourth mission he chose to take in this lucrative TV-series-turned-feature-film franchise. The movie, which opened on IMAX screens a week earlier, grossed $26.5 million this weekend according to estimates from Box Office Mojo.

Earning $17.8 million this weekend and grabbing the second spot on the top 10, Sherlock Holmes: A Game of Shadows holds steady as a favorite. The Robert Downey Jr. and Jude Law sequel to the 2009 Sherlock Holmes film proves that holiday movie-goers love this dark, edgy take on the famous detective series.

Movie review: Sherlock Holmes: A Game of Shadows is gritty, witty and fun >>

Jason Lee held his own with support of his favorite furry singers in the live-action-animated hybrid Alvin and The Chipmunks: Chipwrecked, bringing in $13.3 million and coming in third. Three is a good number for Alvin, Simon and Theodore, as this is the third film in the most recent installment of the animated series staring Lee.

Movie review: Jason Lee is marooned in Alvin and the Chipmunks: Chipwrecked >>

The much-awaited Hollywood version of the popular book and Swedish film series, The Girl With the Dragon Tattoo, debuted soft at $13 million. Starring Daniel Craig as the investigative journalist who must team up with a punk hacker in order to solve a decades-old crime, the film risked alienating mainstream audiences with the graphic sex scenes and violence that made the book so controversial.

Director Steven Spielberg grabs the fifth spot with his debut as an animation director in The Adventure of Tintin, which earned $9.1 million. Tintin is one of two films opening this week by the director. The World War I story about a boy who is separated from his horse due to war, War Horse, debuted on Christmas (Dec. 25), but solid numbers on ticket sales are not expected until later Monday or early Tuesday.

Movie review: Spielberg helms a classic in The Adventures of Tintin >>

One of the most surprising pitfalls of this week’s top 10 is the low placing We Bought a Zoo, coming in sixth at $7.8 million. The Cameron Crowe (Jerry Maguire, Almost Famous, Vanilla Sky) directed comedy starring Matt Damon and Scarlett Johansson about a widower who buys a zoo to try to get over the death of his wife appeared to have more promise.

Rounding out the top 10 were other favorites from the past few weeks, including New Year’s Eve at seventh with $3 million, Arthur Christmas at eighth with $2.7 and wait for it… The Twilight Saga: Breaking Dawn — Part 1 still holding strong at ninth with $2.1 million. Martin Scorsese’s Hugo comes in tenth with $2 million for the weekend.

With lots of good choices in the theaters this year, that’s a wrap on new releases for 2011.