The Duchess of Cambridge impresses her in-laws and the public as she attends church on Christmas Day. 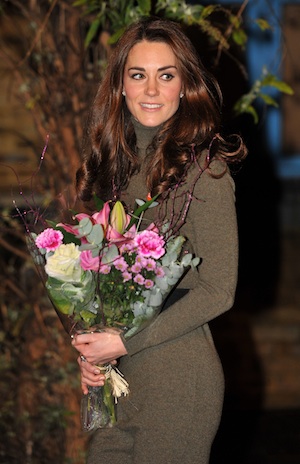 Kate Middleton spent her first Christmas as a royal with Prince William‘s family on Saturday. The Duchess of Cambridge, as she is formally known, attended the annual tradition of Christmas Day worship service while huge crowds gathered outside.

Middleton wore a wine-colored hat and matching dress (not pictured), although each piece was designed separately by different British designers. Her hat was the work of Jane Corbett, but her spokesman declined to reveal the identity of the designer of her dress. He would only hint, stating, “The Duchess is keen to use independent British dressmakers, whose skills and craftsmanship she admires.”

It was a truly royal event with Queen Elizabeth, Prince Charles and his wife Camilla, Prince Harry, and cousins Princesses Beatrice and Eugenie all in attendance. Unfortunately, Queen Elizabeth’s husband, Prince Phillip, was absent given a recent — and serious — health scare. He was admitted to the hospital on Friday evening and later underwent surgery to remove a blocked coronary artery. Kate Middleton arrived walking behind her in-laws, Prince Charles and Camilla, and in between her husband Prince William and his brother Prince Harry.

Services were held at the 500-year-old St. Mary Magdalene Church. Afterwards, over 3,000 people lined up to see the royal family and especially Prince William and Kate Middleton. British tabloid The Daily Mirror reports the couple spent about 20 minutes with fans, accepted numerous bouquets of flowers and appeared to be genuine and “not at all rushed.” It was the largest crowd since Princess Diana’s attendance of Christmas services in the 1990s.

Kate Middleton and Prince William spent the rest of Christmas Day at the royal Sandringham Estate after visiting Prince Phillip in the hospital. The newlywed royal couple will spend Dec. 26 (Boxing Day) with Kate’s family in Bucklebury along with Kate’s sister, Pippa Middleton.

According to most accounts, Kate Middleton’s first royal Christmas was a success given her grace and style.