Christmas time is here and Kendra Wilkinson has come to a realization: “It’s not really about me anymore.” 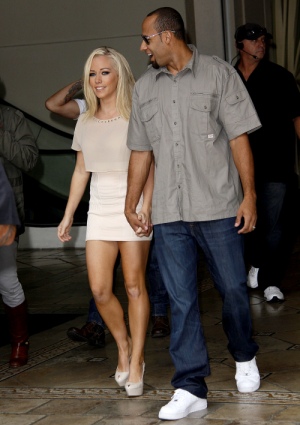 Christmas in Kendra Wilkinson and Hank Baskett’s home has taken on a new perspective. For the first time it’s not about her — it’s about the couple’s 2-year-old son, Hank IV!

“Before I was being a little selfish,” Kendra Wilkinson told People. “I was saying, ‘Forget Christmas — let’s go to Hawaii. Let’s go to the beach. Let’s do something crazy, something non-traditional.’ But then I woke up and I realized that this is going to be baby Hank’s first year to really know what’s going on. It’s not really about me anymore — it’s about him now.”

Focusing on Christmas with the family means starting their own set of traditions in their newly purchased home. The 26-year-old reality star and former girlfriend of Playboy mogul, Hugh Hefner, is mixing elements of her childhood Christmas with their own ideas for son Hank.

Up first? She says “a Douglas fir tree — that’s the number one tradition of my family. Last year we just had a little Charlie Brown tree.”

Hank Baskett, 29, chimed in, “We did have the family traditions growing up, but she said it best the other day: ‘Let’s start our own.’ We’re going to build on those right now. We’ll go get the tree as a family — Hank was out there helping us pick out a tree.”

“It’s exciting because what’s the tradition? We don’t know yet. We’re making our traditions,” he added. “This is our first real Christmas and we’re starting those traditions now.”

Kendra Wilkinson, who said earlier this year she’s ready to have another baby, is focusing on thankfulness. “We’re so appreciative, so thankful and so blessed to be able to celebrate Christmas in our beautiful home with our beautiful family.”