Terminally ill singer Etta James was rushed from her home in Riverside, California to an undisclosed hospital outside Los Angeles on Friday. James’ longtime manager says the star had been having trouble breathing.

Related story Chaka Khan: I snorted, but I never injected 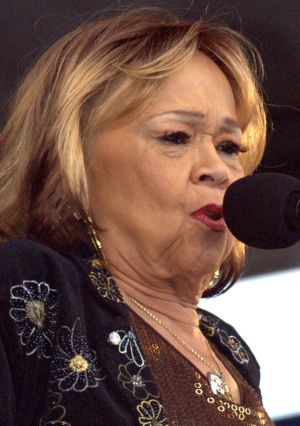 A sad day for soul.

Terminally-ill R&B icon Etta James is back in the hospital.

The “At Last” singer was rushed to a suburban Los Angeles hospital early Friday and placed on a breathing machine.

Etta was taken to a facility near her home in Riverside, California after caretakers noticed she was struggling to take in air, her friend and manager of 30 years, Lupe De-Leon, tells Reuters.

“They took her to the hospital. She was having trouble breathing, so they intubated her. She is on a breathing machine and is resting. It is really sad. She is like my sister,” the manager reports.

James, 73, has been deemed terminally ill with leukemia, Hepatitis C and dementia.

“I am Southern and Christian and would just ask for the prayers of her fans and friends,” the physician said two weeks ago.

James has been struggling with ill health for years. She underwent gastric bypass surgery in 2003 after a long battle against obesity. She was also addicted to heroin for many years.

The star — portrayed by Beyoncé Knowles-Carter in the 2008 film Cadillac Records — was recently at the center of a court battle between her son, Donto James, and her husband, Artis Mills.

The men were at odds over the control of her $1 million estate and the cost of payment of her medical care. Donto’s attorneys questioned the care of a live-in physician and disputed Mills’ control over Etta’s finances.

Both parties eventually agreed to resolve the dispute with mediation.