Baby joy! It’s a girl for Robert De Niro and his wife, ex-model Grace Hightower. The middle-aged couple have welcomed a newborn daughter via surrogate, the actor’s rep confirms. 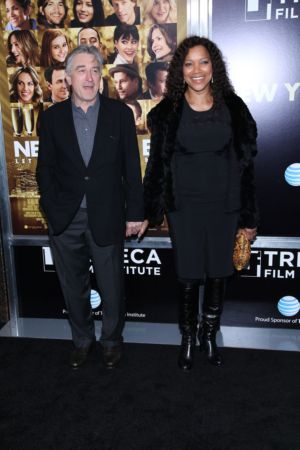 The critically-acclaimed actor and his wife, former model Grace Hightower, 56, just announced some happy holiday news: They’re welcoming a daughter to their family.

Helen Grace Hightower — a healthy 7-pound, 2-ounce baby girl — was born to the couple via a surrogate mother earlier this month, according to De Niro’s rep.

Baby Helen is the second child for Robert and Grace, who first met in London in 1987. Their eldest, a son named Elliot, was born in March 1998.

De Niro is also dad to twin sons with his ex-girlfriend Toukie Smith, another former model. Julian Henry and Aaron Kendrik were conceived by in vitro fertilization and delivered by a surrogate mother in 1995.

(Try to keep up. There’ll be a quiz on this later!)

Be on the lookout for De Niro’s turn as disgraced investor Bernie Madoff to debut on the small screen sometime in the new year. The two-time Oscar winner will play the Ponzi scheme mastermind in a 2012 made-for-TV movie in development for HBO, a network rep told The New York Times last fall.

Truth and Consequences: Life Inside the Madoff Family will be based on the bestselling book of the same name. The page-turner, penned by Laurie Sandell, was written with the cooperation of Madoff’s son, Andrew.