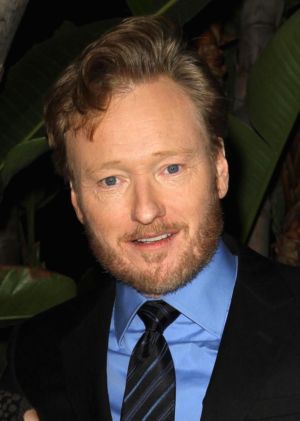 Every year, Conan‘s show staffers participate in Secret Santa gift exchanges. Conan usually sits the gift giving out because, after all, “I give the gift… of employment.”

This year, however, the boss decided to join in the fun.

Conan wound up coming up with a very special gift for talent coordinator, Ashley Olivia.

He discovered Olivia’s not-so-secret obsession with Hamm (who was almost voted People magazine’s “Sexiest Man Alive” in 2010) when he raided her cubicle for last-minute gift ideas.

The picture of Jon lovingly taped to the wall with care might have been a clue.

Conan and Jon have been pals since 2009 — when the award-winning actor appeared as a guest on The Tonight Show and delivered a knee-slapping story about his first meeting with 30 Rock star Tracy Morgan.

Conan O’Brien’s gingerbread gets shaved by Will Ferrell >>

The memory of that story got the wheels beneath Conan’s crop of crimson moving.

On Wednesday night’s show, O’Brien brought Ashley out onto the set and presented her with a framed photo of Hamm.

“I didn’t get it signed. Let’s take care of that right now,” he said as Hamm emerged from backstage.

Jon greeted her with a warm embrace and autographed the picture.

He also gave her a bottle of vitamins.

You know, to ensure good health and prosperity in the new year.