Hip hop savant Tyler, The Creator was arrested Thursday night after a violent incident at the Roxy. Find out what happened — and why he claims he wasn’t arrested. 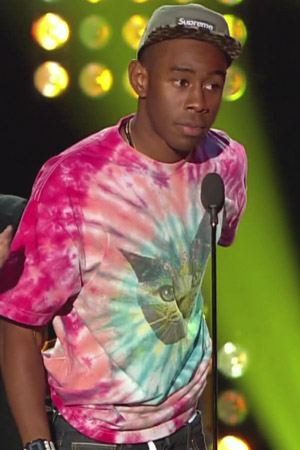 It looks like someone thinks he’s a huge rock star already. Rapper Tyler, the Creator was arrested Thursday night for trashing legendary L.A. nightclub The Roxy.

Tyler — real name Tyler Okonma — was on stage with his rap collective, Odd Future, when he screamed at a sound technician and jumped onto a mixing board and bashed it with his microphone. He was detained by LAPD and later released on $20,000 bail.

The arrest is apparently news to the rapper. “Whoa, Its Stories On Me Being In Jail? The F***? I Wasnt In No Jail Or Arrested Or Nothing,” Tyler tweeted Friday morning, despite a booking photo that clearly shows otherwise.

The 20-year-old rapper is heralded as the next big thing in the music industry by other rappers like Waka Flocka Flame. He also won the “Best New Artist” award at the 2011 MTV VMAs.

“I think we’re all gonna die pretty soon, and the animals are gonna take over — like ostriches and s***,” Tyler said during an interview with Interview magazine. “I think they’re gonna take over the world and we’re gonna be their slaves.”

He also revealed the likely reason behind his Roxy meltdown.

“When I’m on stage, it’s, like, Ian Curtis and Sid Vicious — like, real punk rock and s***,” he told Interview. “I’m like a big 10-year-old when I’m on stage. I just go up there and do whatever I think is cool at the moment. And then, when it comes to rappin’, I like watchin’ a lot of cartoons and movies and s***. Usually, when I’m rappin’, I’m creating a big story or a concept song that sounds like a movie to me.”

Better have some good lawyers on speed dial then, Tyler.