Taylor Swift just unveiled her contribution to The Hunger Games soundtrack. Listen and weigh in with your thoughts! 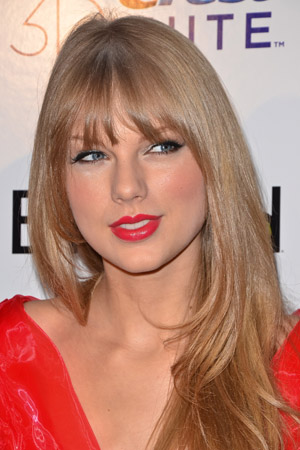 Something I’ve been VERY excited about for a VERY long time is going to be happening VERY soon (and I’m not referring to Christmas),” Swift tweeted Thursday afternoon.

“And this is it, the big surprise… Go get it! #TheHungerGames,” she added, along with the single’s cover art. The song — performed along with The Civil Wars —  is a haunting homage to the upcoming film starring Jennifer Lawrence, Elizabeth Banks, Josh Hutcherson and Liam Hemsworth.

“Just close your eyes. The sun is going down. You’ll be all right. No one can hurt you now. Come morning light, you and I’ll be safe and sound…,” Swift sings in the song.

It’s already hit number one on iTunes, too! It looks like people are pumped for the film’s release — us included!

Jennifer Lawrence — Katniss Everdeen in the film — is pumped to see what fans think of the film.

“Katniss is an incredible character: She’s a hunter but not a killer, a 16-year-old who’s being forced into the arena,” Lawrence told Vanity Fair in a November 2011 interview.

“These kids are killing one another only because if they don’t they’ll die. It’s needless, pointless, unjustified violence. It’s heartbreaking. When I auditioned, I told [director] Gary [Ross], ‘I understand if you don’t hire me, but please remember that after Katniss shoots a bow and kills someone, her face cannot be badass.’ So there’s nothing cool about her. It’s not like she looks around the arena and goes, ‘Yeah, I got this.’ I think she looks around helplessly, and thinks, ‘I made a promise to my sister that I would survive; now I have to kill in order to do so.'”

The Oscar-nominated actress also revealed that filming the movie was more than a little difficult.

“The fact that it didn’t feel like filming a movie. When we were filming in the woods, it didn’t have that Hollywood gloss — it was real snakes, real bears and really scenes of running up and down a mountain for 13 hours,” she said.

We cannot wait for this movie! Fortunately, we have “Safe and Sound” to tide us over until the release.

What do you think of Taylor Swift’s “Safe and Sound?”