Stephen Colbert has made South Carolina an offer they can’t refuse — except they did, but he’s not taking no for an answer. 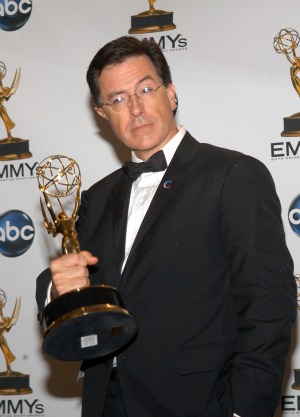 Stephen Colbert‘s political shtick is meant to be taken with a grain of salt — but one state says he is taking it too far.

Colbert offered to help close the funding gap for the South Carolina GOP primary — the first GOP presidential primary to be held in the south — by donating $400,000 to the cause. The catch? He wants the ballot renamed “The Colbert Super PAC South Carolina Republican Primary.”

So is it happening? Colbert says the South Carolina GOP accepted his offer — but the politicos beg to differ.

“We hammered out a contract over barbecue,” The Colbert Report host claimed in a column for The State. “Colbert Super PAC would pay up to $400,000 directly to the state and counties to defray the cost of the election. In return, the primary’s official name would be ‘The Colbert Super PAC South Carolina Republican Primary.’ This name would appear on all press releases, official notices and signage, including the debates. We would finally raise democracy to the same level as the Tostitos Fiesta Bowl and Kardashian weddings.”

Is Stephen Colbert setting up a presidential bid? >>

“The GOP agreed to everything. The referendum was immediately requested, approved by the election commission and even printed on sample and military absentee ballots.”

However, state GOP executive director Matt Moore told The Los Angeles Times it didn’t exactly go down like that.

“Stephen Colbert, the private citizen, called out of the clear blue and made an unsolicited offer to help his home state. We were intrigued and met with him, but also wary,” Moore said. “We determined it was not in the state party’s best interests to accept Mr. Colbert’s offers. Everything was not ‘agreed to.’ We did not sign his proposed contract.”

Stephen Colbert reveals the name bullies called him in school >>

“Despite our repeatedly saying ‘no,’ Stephen Colbert, the comedian, seems intent on being involved. It’s exactly why we were wary in the first place. The state party will not be involved with Stephen Colbert going forward,” Moore concluded.

But Colbert isn’t giving up. “The counties need the money, and Colbert Super PAC wants to give it to you; call it a Christmas Miracle,” he said. “I’ve already filled out the check, and to prove it’s no joke, I’ve written ‘No Joke’ in the memo line.”