Life with four kids underfoot is a lot for Brooke Burke and David Charvet. That’s why this pair of newlyweds has been known to sneak off for a hotel night alone. 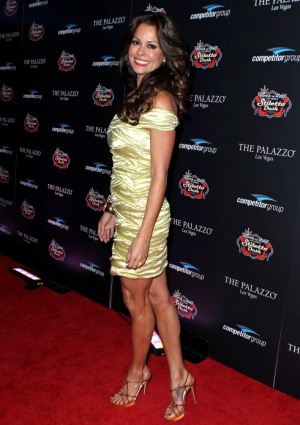 Five months into their marriage Brooke Burke and David Charvet have placed a higher priority on sleep than hanky-panky time. The parents of four are so desperate for peace and quiet they’ve even been known to check into a hotel for a “sleepcation.”

You see, 4-year-old Heaven and 3-year-old Shaya are still prone to joining their parents in bed at home. “My two younger kids always end up in our bed in the middle of the night,” Brooke Burke recently told Fitness magazine.

“I think that sleep deprivation is a really bad thing for a woman, not only for her skin and eyes, but also for her mood, memory, metabolism, energy and sex drive,” the 40-year-old continued. “David and I have done ‘sleepcations,’ where we check into a hotel room simply to be alone and sleep.”

Daytime in the Charvet home isn’t without its hiccups either. Brooke Burke shared, “I wish I were always calm in the chaos. I have children with very strong personalities, and as elating as that is, it can also be deflating. There’s a lot of action in my household and sometimes I’m a referee all day long.”

The children, who include Neriah and Sierra from Brooke’s first marriage to Garth Fisher, often have a hard time adjusting to the comings and goings of their different families. “Having a blended family is a challenge,” explained the Dancing with the Stars co-host. “Two of my children are with their father part of the week, so when they come home they want me all to themselves.”

She went on to say, “Then my other two children, who have had me all to themselves, suddenly have to share me and that can make them very needy.”