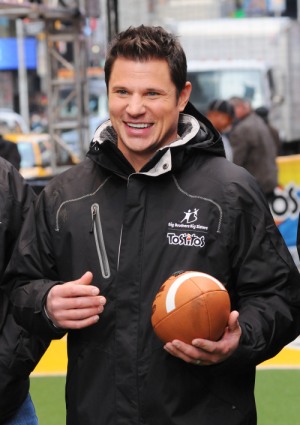 Now that Nick Lachey and Vanessa Minnillo have tied the knot everyone wants to know when they’re going to start having babies! The time frame differs a bit whether you ask him or her, however.

“I don’t think there’s necessarily any timetable for it,” said Lachey, 38. “We’re definitely excited about being parents at some point, but I think whenever that happens, we’ll embrace it and be excited for it. There’s no real sense of urgency at this point.”

On the other hand, Vanessa Minnillo seems more ready to get the baby making underway. Just last week she commented on starting a family with Nick Lachey saying, “How can you say no to those dimples and baby blues? [Babies are] the next natural step.”

The 31-year-old television host and actress continued, “I do love my work and what I do, but Nick is more important to me than anything in this world — soon my children will be the second most important thing to me.”

Of life as a newlywed (for the second time) Nick Lachey said in August, “It’s great. Obviously we’re still in the honeymoon period. Not much changed, which, for me, is a good thing. We’ve been together five years. We were very comfortable in our relationship before the marriage.”

Looking back on the singer’s thoughts prior to Kim Kardashian and Kris Humphries’ wedding we’re hesitant to take Lachey’s predictions on anything the future holds too seriously. “I’m sure that Kim and Kris will be just fine,” he said before the ceremony and infamous 72 following days of matrimony. “She’s got the whole reality thing figured out, so it should be seamless.”

Up next for Nick and Vanessa is their first Christmas as husband and wife, complete with plans for an ugly sweater party! “[Vanessa] went shopping for my sweater yesterday,” he said. “From what I’ve seen in pictures, it’s pretty heinous.”

Do you think Nick Lachey sounds as ready to start a family as Vanessa Minnillo?