Miley Cyrus is furious with a so-called fan after a confrontation in Costa Rica. Read how the pop star went off on the girl on Twitter. 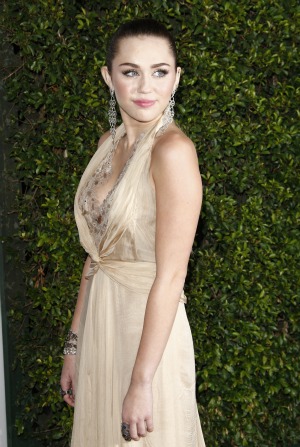 Don’t mess with Miley Cyrus while she’s on vacay! The pop star tried to do the right thing by obliging fans for an impromptu photo shoot while trying to relax with boyfriend Liam Hemsworth in Costa Rica, but as you’ll see in the video, no good deed goes unpunished.

Cyrus and Hemsworth were trying to rush to their waiting helicopter when the fans approached, asking for photos and autographs. Cyrus gamely posed for a few, then had to rush off — much to the chagrin of one disgruntled fan, who called her a choice name — and earned the star’s ire.

Where did Miley Cyrus get those boobs? >>

In the video posted below you can hear the so-called fan call Cyrus an “a******,” and the pop star respond, “What the f***, are you for real?” before stalking away to her waiting helicopter.

“We’re on vacation, I’m not being an a**hole, we’re on vacation,” she said, stalking away. But when several more fans caught up with her at the chopper, she graciously posed for a couple more snaps.

Cyrus probably would have blown the whole thing off if the video hadn’t hit the local Costa Rica news, then YouTube — so she tweeted her version of the events.

“Been trying not to tweet & just enjoy the holidays but just to clear something up I would NEVER swear to a fan,” Cyrus posted on her Twitter page.

“When someone yells something SO rude making ME look like an ‘a******’ in front of fans who I am more than happy 2 take a picture w/ i cant tolerate that kind of rudeness.”

“Every1 who was there apologized 4 the woman’s brusque behavior. She obviously wasn’t a fan. Hope every1 has a Merry Christmas! LOVE 2 ALL!”

She now returns to her regularly scheduled vacation.

See Miley Cyrus argue with a fan in Costa Rica: