Justin Bieber is giving more than receiving this Christmas. Find out how much he dished out Wednesday in Toronto!

Justin Bieber’s mom might not have let him believe in Santa Claus as a tot, but that hasn’t kept him from playing St. Nick to a bunch of worthy causes this holiday season. The “Baby” singer went back home to Canada Wednesday to play a fundraising concert in Toronto. 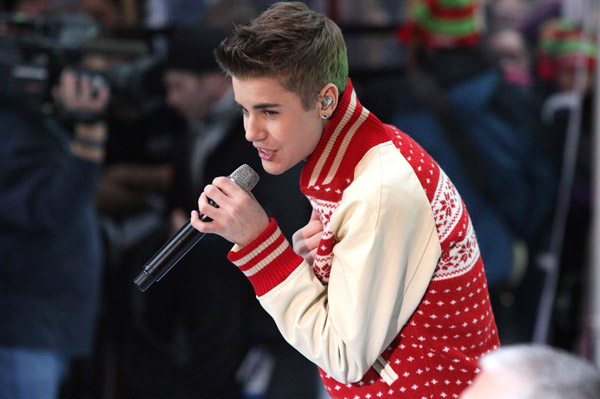 During the concert, Bieber presented the Children’s Wish Foundation a giant cardboard check for $500,000. The concert — taped for the upcoming special Justin Bieber: Home For The Holidays — started an hour late after the Biebs met with three ill fans backstage, according to The Hollywood Reporter.

He also brought his three-year-old sister, Jazmyn, on stage to sing with him. Adorable.

This isn’t the only way Bieber is giving back this year — proceeds from the sales of his Christmas album, Under the Mistletoe, go to various charities. His fragrance, Someday, also benefits charities like Pencils for Promise. He also stopped by a Las Vegas middle school last week with a $100,000 check.

Why the giving spirit? Bieber knows what it’s like to not have a lot of money for food, let alone Christmas presents.

“I remember growing up not having a lot, especially around Christmastime. We had to get stuff from the food bank,” he told Billboard earlier this year. “I want every one of my fans to feel like they’re helping out the world in some way. And being the one to influence them to do that, that’s something positive I can do with what God’s given me.”

Keep it up, Justin — you’re making a big difference in your fans’ lives.