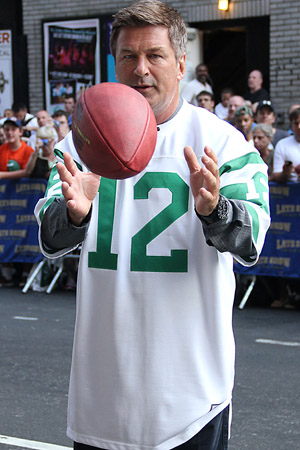 Sorry, New Yorkers: It looks like you won’t ever get to play Words With Friends with Mayor Alec Baldwin — he revealed that he’s not running.

“The people that are running for mayor… I don’t see myself in that crowd,” Baldwin said while he interviewed director Stephen Daldry on Here’s the Thing on New York City radio station WNYC. “They are like a guy on a date that you can tell he just can’t wait to get his hand up your blouse before even the lights go out in the theater.”

This signals a change of heart for the politically-minded Baldwin. The 30 Rock actor has hinted that he might run to replace current mayor Michael Bloomberg when his third term ends in 2013.

“I doubt it now. The older I get the more I feel that all of it has changed,” he revealed. “I’ve got a job now… We have fun, and it’s a family and I love New York and I’ve got a life.”

He knows he has it good now, despite the pesky run-ins with American Airlines staff from time to time.

“Give this up for what? I give up money and fame and position and success, I give up this wonderful life I have now in exchange for the chance to really change things. Yeah, I’m not quite sure you can anymore,” he added.

It’s probably for the better. After all, politicians need to keep their cool under pressure — something Baldwin’s not good at doing.