The lady has arrived! HBO has released the first trailer for the biopic Game Change. The film centers on Sarah Palin and John McCain’s 2008 presidential bid, which became a political and pop culture phenomenon. 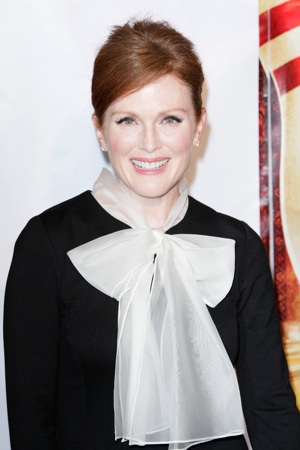 Julianne Moore has made a change. She’s pinned her hair, put on glasses, and perfected her accent to become the one, the only, Sarah Palin. The Oscar-nominated actress stars as the former Vice Presidential candidate in the HBO movie, Game Change.

Back in April we saw the first photo of Moore as Palin, and now we get to hear her speak. In the teaser trailer for Game Change, Palin is pumped to the masses. She’s viewed as the saving grace of the Republican party.

In 2008, Barack Obama was gaining momentum in the polls and John McCain desperately needed an ace up his sleeve. When it came to picking a running mate, he needed a game changer. Cue Sarah Palin.

The promo features Moore as Palin, Ed Harris as John McCain and Woody Harrelson as his stressed out campaign manager Steve Schmidt. Palin doesn’t say much in the trailer, because she spends most of the time hiding her face. It’s a classic way to build tension.

The trailer ends with Palin on stage in front of a crowded stadium. She steps to the mic and says those famous first words, “I will be honored to accept your nomination for Vice President of the United States.” Moore has her work cut out for her. She’s following in the footsteps of Tina Fey, whose Palin impersonation on SNL earned her a Primetime Emmy.

Game Change is based on the bestselling book of the same name written by John Heilemann and Mark Halperin.

Watch the first trailer for Game Change below: