During Wednesday’s finale, American Horror Story did something not many TV shows would do in their first season — kill off an important part of the show.

You have to be fearless and make tough decisions when making good TV and no one knows that better than creator of American Horror Story, Ryan Murphy. 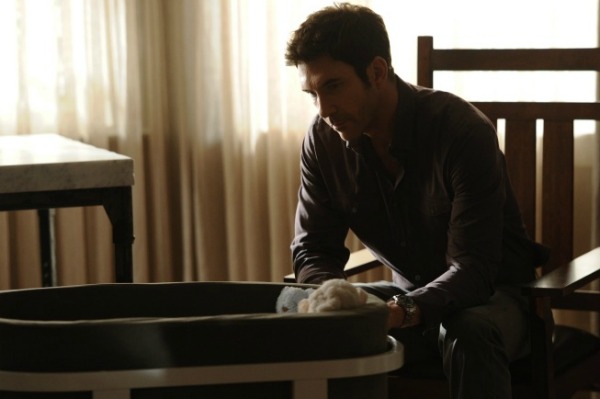 Who in their right mind would kill the remaining main character of a TV show in its first season? Ryan Murphy would, and he did.

Before we go on, keep in mind this is AHS, and when we say kill, we pretty much mean turn people into ghosts. Still, we never thought Ben Harmon would meet that fate as the rest of his family did.

During the season one finale of the Golden Globe nominated show America Horror Story, Ben Harmon was reunited with his dead wife Vivien (Connie Britton) and daughter Violet (Taissa Farmiga) in the afterlife — after he was dramatically hung from a chandelier. Thanks Hayden!

Yes, we know, we gasped too.

Sure, he spent the episode in a suicide mindset, but almost made it out of the house after a meeting with Vivien’s ghost. We would have thought Constance shrieking for him to get out would have helped too, but not so much.

Too bad he came up just a bit short and bit it. Ben’s death actually turned out to a morbidly happy reunion for the Harmon family.

Plus, It was fun watching him and his reunited family scare new potential owners away from the house. What a quirky new role for the ghost family. It’s like Beetlejuice all over again.

When asked if there was any doubt when deciding the finale, Creator Ryan Murphy told Entertainment Weekly, “No, because that would really screw the whole story up. I loved how it began. I loved it in the middle and I loved the end. The only thing really frustrating for me, to be honest with you, is that sometimes people would write this idea that we were making it up as we went along and I wanted to say, ‘Really?’ But I think now people are writing and saying, ‘Oh yeah!'”

Murphy added, “I’m excited for people to see it on DVD, because now that they know how it ended, [they can] go back and see all of the little things, like people who have no reflections in mirrors. When you go back, you will see everything was set up.”

Season one ended with Constance (Jessica Lange) taking the motherly role of what has been deemed the Antichrist, Michael.

As the show went forward three years, Constance was seen with Michael who just killed his nanny.

She leaned in close to him and said, “Now what am I going to do with you?”

Indeed, what is she going to do with him? What a chilling ending!

Let’s keep something in mind. It seems those who die in the house, stay in the house, so don’t freak out yet. There could be more Harmon family fun to be had.

Head over to our comments section and tell us what you thought.

Did the American Horror Story finale give you chills?