Prince William and Kate Middleton cut loose during a charity visit to one of Will’s fave pet projects. Who knew the future king could boogie? 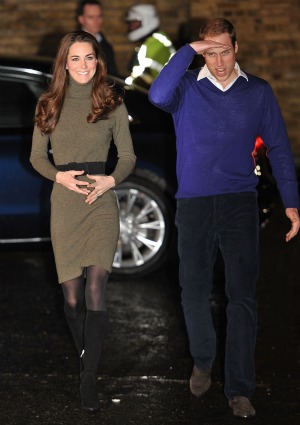 Prince William and Kate Middleton continued their do-good tour of duty at a homeless shelter Wednesday — and the young royals showed they can cut loose with the best of them.

The Duke and Duchess of Cambridge visited the Camberwell Foyer, a center run by Centrepoint — a group whose shelters Princess Diana used to visit with her sons when they were just boys. William is now a patron of the organization, even sleeping outside two years ago to highlight the plight of those who must take advantage of their services — and Kate is said to be eager to join in his support.

“It is one of the prince’s oldest patronages and is particularly dear to his heart. He has been keen to show the Duchess the charity’s work in action. It will be the first time she has visited a project of this kind in this country and she has been looking forward to it immensely,” said an aid.

Kate Middleton and Prince William are on the move again >>

While at the center, Will and Kate checked out the Workwise program, which helps prep people for job hunting, made mince pies and gingerbread men and even got their dance on!

While Kate giggled away, Will brushed his shoulders off alongside 18-year-old resident Vanessa Boateng after she told him how fly he looked at his wedding.

All in all the visit was a wild success — the perfect prelude to what is sure to be a nerve-racking holiday for Kate. The newly-minted royal is spending her first Christmas with the Queen at Sandringham, where she must strictly adhere to royal protocol and submit to as many as five wardrobe changes a day.