Mariah Carey’s twins have yet to celebrate their first birthday, but that doesn’t mean the ‘Dem Babies’ tots can’t take part in a music video! 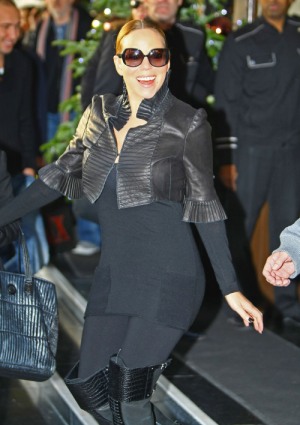 Nick Cannon and Mariah Carey‘s twins keep A-list company. The 7-month-old pair make an appearance in their mother’s music video for “When Christmas Comes” alongside their father and singer John Legend. Watch below!

Monroe and Moroccan, nicknamed Dem Babies by their parents, are dolled up in coordinating holiday outfits for their very first Christmas. The pair are coddled and kissed by friends and family as their famous mother sings, cooks in the kitchen and lolls on the sofa.

Mariah Carey, seen here arriving at her hotel in London on Dec. 12, doesn’t plan to have any more children because of her rough pregnancy with the twins. “If God chooses to do that to me, then that would happen; other than that, I don’t think we would try for that ever again,” she said in November. “I really don’t know if I can make it through after what I went through, it was really tough.”

He went on to add of Roc, “My son knows how to play the drums.”He actually knows how to keep the rhythm and time. It’s really crazy. They’ll definitely have some skill in that area.”

The pair, no strangers to the high life and often synonymous with extravagance, are taking a surprisingly simple approach to getting gifts for the twins’ first Christmas. “This year there’s no point because they won’t remember it so all the toys are just going to be for me,” Cannon shared.

Mariah Carey, who lost an astounding 70 pounds after giving birth in April, can also be seen dueting with young Justin Bieber on the Christmas song “All I Want For Christmas Is You” on his holiday album Mistletoe.