Chinese officials will not apologize to Christian Bale for their rough treatment of him last week when visiting an anti-abortion activist. 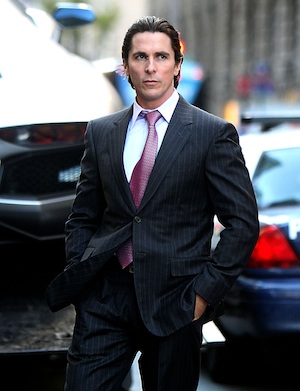 China’s Foreign Ministry responded today to allegations government security guards treated Christian Bale and news crew CNN too harshly when they tried to visit an anti-government activist. Christian Bale was in China to promote his latest film, The Flowers of War, but made a day trip to visit activist Chen Guangcheng in a small village outside of Beijing.

Liu Weimin says China is not at all embarrassed by the incident. “If anyone should be embarrassed, it’s the relevant actor, not the Chinese side. What I understand is that the actor was invited by the director Zhang Yimou to attend the movie premiere. He was not invited to any village in Shandong or to create news or make a film. If he wants to create news, I don’t think that would be welcome by China.”

Video captured by CNN shows the The Dark Knight star and a CNN crew being turned away by Chinese security as they approached Dongshigu, a small village about eight hours from Beijing as Bale and CNN attempted to visit the activist’s home. Throughout the video, Chinese security repeatedly push Bale and the news crew while rushing them to their car.

Chen Guangcheng is under house arrest for an indefinite period of time and is known for exposing government forced abortions and sterilizations. He is blind and a self-taught lawyer.

Bale wanted to meet Guangcheng, whom he feels is an inspiring figure. His representative released a statement to The New York Daily News explaining Bale “has been following [Chen’s] story and was moved by it, and just wanted to see if there was a way to help him.”

Christian Bale has yet to release a statement in response to China’s comments.