Simon Cowell must be one proud papa. The final three of The X Factor hit the stage Wednesday night, all in the name of a $5 million contract! See who threw down! 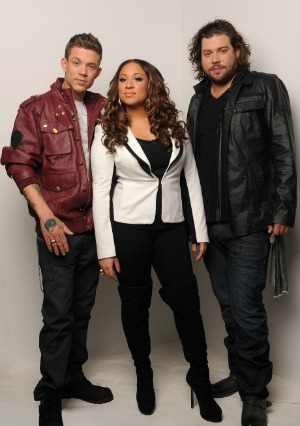 They came to win and there’s no going back now. Unless, you’re the loser, in that case, The X Factor will seem like one long vacation from your normal life.

Chris Rene, Melanie Amaro and Josh Krajcik all made Simon Cowell look good on Wednesday’s finale, where they each got to sing with a mega-star.

We’ll take a little Alanis Morissette any day, so we give props to Fox for locking her down to sing with Josh Krajcik.

Next to Morissette, Krajcik seemed a bit awestruck, but eventually settled into “Uninvited.”

But that wasn’t the point. He also had to beat out the competition with his voice, which was a little shaky. Kudos to the little rap segment in “Complicated,” though.

Okay, brace yourselves. R. Kelly plus The X Factor equals we can’t believe that actually happened.

We knew he was showing up to the party, but he did more than show up — he put his duet partner in a prime position.

Melanie Amaro got soulful with R. Kelly and we probably don’t have to tell you what they sang, because you know. Oh, alright — “I Believe I Can Fly.”

That’s one of the best songs written and she was pretty much handed a golden opportunity and ran with it — or should we say, sang with it?

Melanie Amaro aside, the boys seemed a bit thrown off by singing with the big guns.

We would have been happy stopping there, but ’tis the season for giving, and Fox decided to give us one more performance for each contestant.

Our hats off to all three of the finalists, but Chris Rene brought out a final performance that even Simon Cowell said was his “five million dollar song.”

He had the crowd on their feet, Simon Cowell rocking and L.A. Reid hollering. It was sheer brilliance.

You’d think that would be two-hours of singing competition bliss, but the show was actually shaved down to 90 minutes. We know, shocker.

You don’t want to miss part two Thursday night — there’s a Pitbull and a Bieber showing up, plus the winning moment.

What did you think of part one of the two-part finale?