Get ready to fall under Snow White’s spell. The beautiful Lily Collins and Julia Roberts are front and center of Relativity’s Mirror Mirror. Naughty meets nice in the latest poster for the fable-inspired comedy. 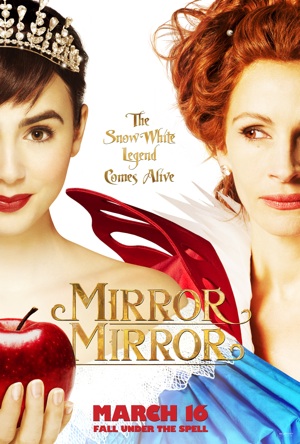 Who’s the fairest of them all? With leading ladies like Julia Roberts and Lily Collins, it’s hard to choose! Relativity Media has released a new poster for their upcoming Snow White adaptation, Mirror Mirror.

The film is a fantastical comedy that tackles inner versus outer beauty. In Mirror Mirror, Collins stars as Princess Snow White, while Roberts plays her nemesis the Evil Queen. The devious matriarch forces the princess into exile, and seizes control of their magical kingdom.

While on her own, Snow White gets a helping hand from seven dwarf rebels. The group devises a plan to expose the Queen and her deeds once and for all. With new friends by her side, Snow White quickly goes from meek maiden to independent woman.

Mirror Mirror co-stars Armie Hammer as the charming Prince Alcott, Nathan Lane as Brighton, the Queen’s spineless servant and Sean Bean as the regal King. The film is directed by Tarsem Singh, who previously shot the November blockbuster Immortals.

Before landing the coveted role of Snow White, Lily Collins appeared alongside Taylor Lautner in the thriller Abduction and Sandra Bullock in the acclaimed drama, The Blind Side. Oscar-winner Julia Roberts recently starred in the comedy Larry Crowne, and last year’s Eat Pray Love.

Collins is currently filming the dramedy The English Teacher with Julianne Moore and Greg Kinnear. She’s also attached to Scott Charles Stewart’s The Mortal Instruments, where she’ll play a teen who discovers a dark secret about her family’s past. Miss Collins is a very busy girl!