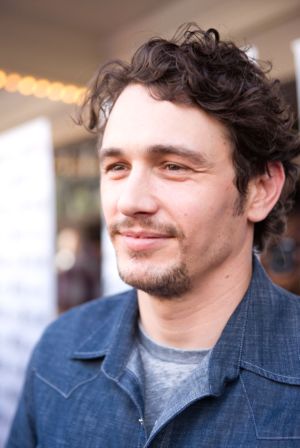 James Franco might want to dust off his rose-colored robe.

The part-time college student is in chats to don a smoking jacket as a younger version of pipe-puffin’ Playboy mogul Hugh Hefner.

The role would come in Lovelace, the upcoming big screen biopic about adult film actress Linda Lovelace. Franco was originally approached for the role of Lovelace’s manager — husband, Chuck Traynor.

The Oscar-nominated star is now being touted to take on a smaller part in the feature, playing the founder of the iconic made-for-men glossy, Variety has learned.

Peter Sarsgaard has signed on to play the abusive Traynor.

The screenplay is an adaptation of The Complete Linda Lovelace, a tell-all book by W. Merritt Johnson. Rob Epstein and Jeffrey Friedman. Friedman worked with Franco on the 2010 drama Howl.

James is certainly no stranger to shaking his wang for the camera. He once revealed that he starred in his own sex tape.

“I remember when I was 19 doing that and then watching it back and thinking, ‘Oh, that looks horrible.’ You have a lot of respect for those actors in pornography, because they are really not just doing it, they’re really selling it.”

We wonder what Hef will think of the Franco casting. After all, Robert Downey Jr. already earned the Hugh Hefner Seal of Approval to portray the Bunny Boss in a proposed biopic based on his life.

The Iron Man regularly expressed an interest in taking on the lead role in a retelling of the aging Lothario’s life story for months before being given the green light from Hugh himself.

“Downey and I have talked about it and it is a very real possibility. He’s a marvelous actor and I would be honored if he decided to do it…”