Suri Cruise doesn’t want much for Christmas — she just wants everything! 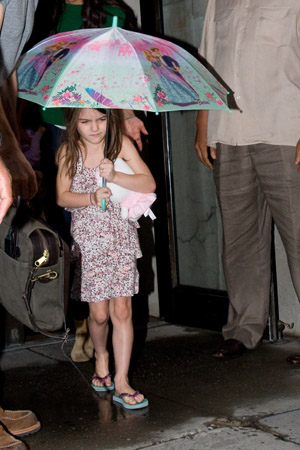 What’s on your Christmas list this year? If you’re like us, you’re asking for the usual: Clothes, tech products and some BluRays.

We were excited about our gift lists — until we saw Suri Cruise’s Christmas list. The fashion plate daughter of Tom Cruise and Katie Holmes is asking for $130K worth of super luxe gifts and we’re sure she’s getting all of them.

The main gift? A pony, of course. What little girl doesn’t want a pony? Except that Suri’s parents have the means to actually get her one. She reportedly wants a $100K horse and Tom has already found a stable in Beverly Hills to keep it.

“Suri is very mature and knows what she wants,” a source told InTouch Weekly. “Tom and Katie love the holidays and always go overboard… they are buying Suri absolutely everything she asks for.”

Of course they are. The little diva already has a $100,000 tree house and more shoes than most adults. Katie claims they don’t spoil Suri, though — instead, they let her figure out her own way in life.

“Recently, Suri and I were taking a walk and a fight got started because it was cold outside and she didn’t want to wear her coat,” she told InStyle earlier this year. “My philosophy is, well, fine, because after a block of walking you’re going to ask me for your coat. So the pictures of her [without a coat in cold weather] are sort of embarrassing, but I said, ‘Suri, I’ll take the hit. Just put it on when you get cold.'”

Life has to be a lot easier to figure out when you have a pony and designer gowns, don’t you think?

Do you think Katie Holmes and Tom Cruise are raising a spoiled Suri?