Hilary Duff has a lot to be thankful for this holiday season: She’s expecting her first child and her furry child, Lola, is out of the hospital. 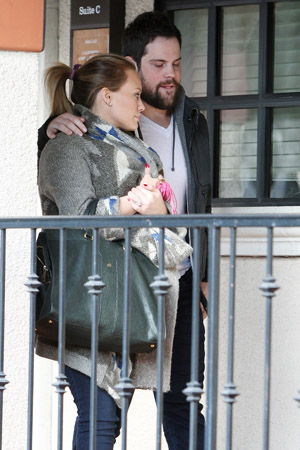 Hilary Duff is going to be a great mom, if her care for her sick dog is any indication. The actress tweeted about her beloved Lola’s health problems earlier this week.

“Could not have asked for a better gift! Got 2bring Miss Lola home 2day!” Duff tweeted Tuesday night. “She is standing up by herself! And taking some steps! Big improvement!”

The Chihuahua went into an animal hospital on Dec. 13 for an undisclosed ailment. Duff was later spotted outside the animal hospital looking very distraught. “Could every1 please say a prayer for my pup lola, she has surgery in a half hour!” Duff tweeted. “She’s a strong girl but needs all good energy sent her way.”

“Lola update: she is getting a bit better everyday it was major surgery and I have to keep that in mind. still in the hospital 🙁 home on Tuesday,” she tweeted this weekend.

Duff — expecting her first child with husband Mike Comrie — is partly credited with starting the “dogs as accessories” trend in Hollywood. Her love for her pooch is apparent in everything she does — little Lola is even featured in a video game.

“Most of my fans know how much I love animals, and a lot of you guys have probably seen me with my Chihuahua Lola because I take her everywhere — she’s even been on a magazine cover with me! What you might not know is that Lola and I are going to be featured in the new Sims game, The Sims 2 Pets,” Duff said in a 2006 press release about the game.

Aw. Here’s hoping Lola gets back to barking soon — she’s got a sibling coming!