The end of season three marked the last time anyone will have a chance to hang with Hung. HBO has axed Thomas Jane and the future of Happiness Consultants. 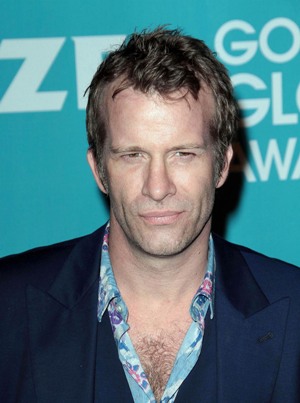 Thomas Jane and the Hung crew are on the losing end of HBO‘s renewal picks. Bored to Death, How to Make it in America and Hung were all canceled by the network’s programming president Michael Lombardo on Tuesday.

Surprised by HBO’s decision to cancel Hung? The tale of teacher Ray Drecker turned male prostitute earned a respectable average of 3.9 million viewers, but couldn’t maintain the 6.9 million pairs of eyeballs held during its initial season.

Fans of Hung who watched Sandee shoot life coach Lenore on the season three finale Dec. 4 will never know her fate, or the fates of Tanya (Jane Adams) and Ray (Thomas Jane), both of whom received Golden Globe nominations for their roles.

Lombardo reportedly waited for the finale episode to air before making the decision to cut the show from HBO’s line-up, perhaps hoping for an eleventh hour ratings miracle, but he’s ultimately leaving fans hanging.

The round of cancellations makes room for new HBO comedy shows to shine. On deck are Girls, created by and starring Lena Dunham; Veep with Julia Louis-Dreyfus; Life’s Too Short, with Ricky Gervais; and Angry Boys from Summer Heights High creator Chris Lilley. Returning in the line-up is Laura Dern with Enlightened.

Before the Hung spotlight fades away, Thomas Jane hopes to clarify reports that, like his character, he was once a male prostitute.

“In the interviews that I did, I never said I was a prostitute,” the 42-year-old recently told The Fix. “I was talking about my [early] time in Hollywood: I said that I’d had a sexually adventurous time and I was trying to relate that to how I play a prostitute on TV — trying to relate my experience to my character’s experience — and well, people heard what they wanted to hear.”

“I suppose ‘sexually adventurous youth’ wasn’t as much of a headline grabber,” he added.

Are you upset to see Hung end so abruptly?