Is Tinseltown losing one of its most famous families? Soccer ace David Beckham has reportedly promised to sign an agreement with a French soccer club. Insiders say the deal would likely mean a move back to Europe for the sportsman’s wife Victoria and the couple’s four children. 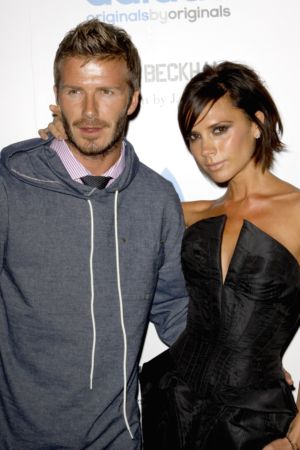 So long, City of Angels. Hello City of Light?

David and Victoria Beckham are considering leaving the U.S.

Buzz on the sports scene claims the L.A. Galaxy soccer star has agreed to ink a multimillion-dollar deal with French club Paris Saint-Germain that could send his famous family back to their native Europe.

A rep for the Beckhams insist nothing’s official, but the French press claims David has already approved a deal for a one-and-a-half year contract with the soccer team.

Turned off by the idea of having Victoria and their four children — Brooklyn, 12, Romeo, 9, Cruz, 6 and 4-month-old daughter Harper — remain in Los Angeles while he plays on another continent, David’s lobbying for the entire family to relocate.

In fact, Posh ‘n Becks are reportedly already lining up possible new schools for their sons.

“They are preparing to be back in Britain and have been looking at schools for the boys. David is keen on one particular school because it’s the area where he grew up and when he was a child he always wished he could have gone there,” a squeal told Britain’s Sunday Mirror earlier this month.

Victoria was initially reluctant to move, but the pop star-turned-successful fashion designer is now “excited” about returning home, the source added.

“David has always been adamant he wants to end his career in Europe and Victoria is totally behind the move. She is using the opportunity to work on her fashion profile in Europe and the boys will be privately educated. They are all very excited.”

Tattling tipsters say the Beckhams will split their time between London and Paris. But they aren’t ripping up all the roots they’ve planted Stateside.

“The advantage of being over here is they can spend more time with their families. But they love L.A., so it’s likely they’ll be back.”

The celebrated sportsman and the former Spice Girl moved from Madrid to Los Angeles in 2007.

Their high-profile arrival in the States was welcomed with an NBC reality special for Victoria and a “Welcome to America” party, hosted by the couple’s celebrity pals Tom Cruise and Katie Holmes.