The Hobbit: An Unexpected Journey follows title character Bilbo Baggins, who is swept into an epic quest to reclaim the lost Dwarf Kingdom of Erebor — long ago conquered by the evil dragon Smaug.

It’s finally here! We’ve got your first look at visionary Peter Jackson’s hugely anticipated The Hobbit: An Unexpected Journey in this must-see, just-released first trailer for the film.

And if you love hobbits (Doesn’t everybody?), we’re guessing you’ll get a kick out of the return of Gandalf, Frodo and the rest of the gang from Middle Earth. 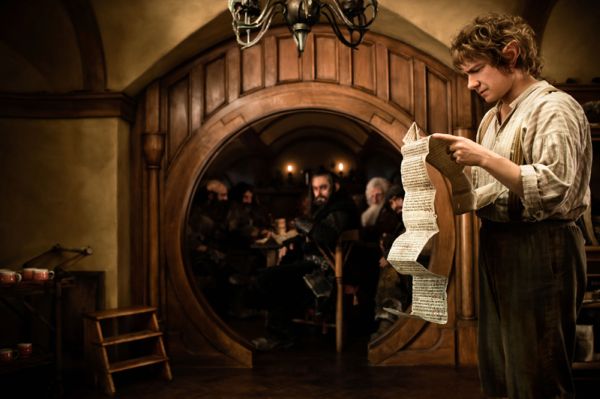 J. R .R. Tolkien’s The Hobbit is the first film in a series of epic fantasy adventure prequels.

It’s also one of 2012’s most anticipated movies.

Sir Ian McKellen returns as Gandalf the Grey with Andy Serkis back as Gollum. Cate Blanchett returns as Galadriel. Orlando Bloom reprises his role as Legolas.

Elijah Wood of Rings fame is back to play Frodo Baggins. Frodo is the cousin and adopted son of the said hobbit of the film’s title, Bilbo Baggins — played by BAFTA-winning English actor Martin Freeman.

New video from The Hobbit >>

A prequel to Jackson’s Oscar-winning Lord of the Rings trilogy, The Hobbit tells the story of Baggins as he and his pals head to the Lonely Mountain to retrieve treasure from a giant dragon called Smaug and reclaim the lost Dwarf Kingdom of Erebor.

Baggins is joined by Gandalf and 13 dwarf warriors as he encounters giant spiders, shapeshifters, sorcerers and all kinds of creepy creatures.

Let us know your thoughts on the first Hobbit trailer in the Comments Section below.