Hugh Hefner is relieved that Crystal Harris was a runaway bride — but says the whole mess is pretty much Holly Madison’s fault.

Hugh Hefner could be celebrating his first Christmas as the husband of Crystal Harris. Instead he will be warming his buns by the fire with two new girlfriends, which is just fine with him. The Playboy founder says he narrowly escaped a dim fate when Harris left him just days before their wedding — and, by the way, the whole thing is pretty much Holly Madison’s fault. 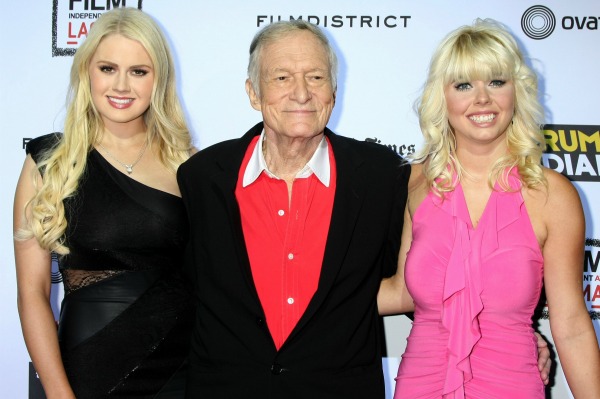 Hef explained why he is far from heartbroken to OK! Magazine.

“I certainly cared for her, but it could not have played out any better because I obviously misjudged the relationship,” he said.

“I’m a romantic and romantics tend to do that. Thanks to Anna, I fell into a very nice backup relationship and then with Shera,” he said, referring to his new gal pals Anna Sophia Berglund and Shera Bechard, two former friends of Harris.

“The simple truth is, for a guy who is known for being America’s number one playboy, I’ve been trying to settle down for a few years but [keep] picking the wrong ladies.”

Here is how this whole mess is the fault of his ex head girlfriend Holly Madison:

“When I was with Holly Madison, I was still married to my ex-wife and not looking to getting married again,” he explained. “Then the relationship with Holly fell through and I think the fact that didn’t work out clouded my decision making in my relationship with Crystal.”

Classic rebound error. We’ve all made it. Luckily he escaped before a very expensive mistake was made.