The new Paul McCartney “My Valentine” is available for streaming. The track will be on an upcoming album of standards. 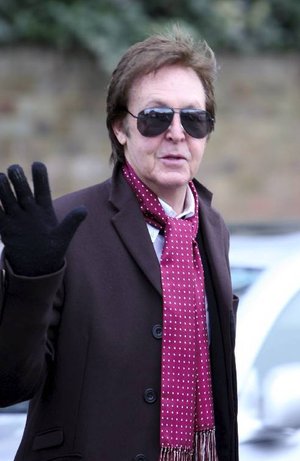 It’s an early Valentine’s gift for Paul McCartney fans — a brand new song called “My Valentine,” available for listening here. The track is to be one of two new songs, the other is “Only Our Hearts,” to be included in an untitled new album of standards due from the rocker on Feb. 7.

What the song also represents is a style departure for the ex-Beatle. On the surface, “My Valentine” is a love song, and sure, McCartney knows something about that. He’s written some of the greatest in history and some of the silliest: remember “Silly Love Songs?” But there is a complexity at work on “Valentine” that belies an easy categorization.

Take the music. There’s a shudder of brush drum sticks, an unadorned piano, a searching acoustic guitar lead, provided by Eric Clapton and mournful strings — the combination suggests a loss or perhaps an impending darkness. It’s certainly not the arrangement of a carefree love song. Then there’s the lyrics. The action begins in the rain.

The singer is coming from a dark place into a regenerative love. In “Valentine,” he not only finds a soul mate but a passage to a better tomorrow. Hence the chorus, the intro of which is framed by a harp:

And I will love her, for life
And I will never let a day go by
Without remembering the reasons why
She makes me certain that I can fly

The contrast of emotions of “My Valentine” makes for a sweet melancholy and an exceptional record. The light-jazz track does have echoes of the Great American Songbook, so it sets the plate for McCartney’s upcoming album. Diana Krall and Stevie Wonder will also make guest appearances on the album.