Jackie magazine editor Eva Hoeke is out of a job after an article she approved called Rihanna a racial slur. Find out how she tried to explain away her awful mistake.

The Dutch editor of Jackie magazine Eva Hoeke has resigned amid the outcry over a published article that referred to Rihanna as the “ultimate n**** b****.” The resignation came after she tried to explain away the criticism in a Facebook post. 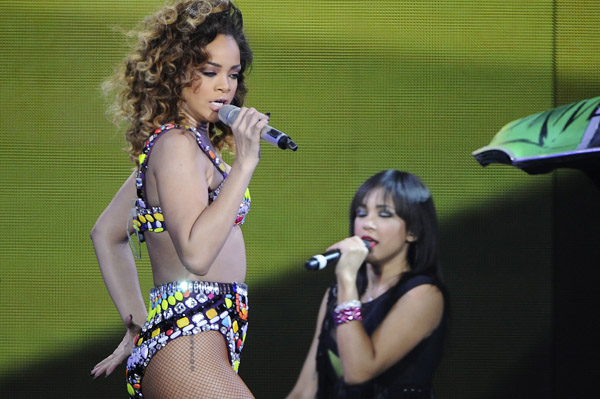 “We are, of course, very fed up over this and especially very shocked,” Hoeke wrote on the social media website. “However, I’m glad that we’re engaging in a dialogue on this page — not everybody does that. Thanks for this. Other than that I can be brief about this — this should have never happened. Period.”

While the author meant no harm — the title of the article was intended as a joke — it turns out that no one is laughing. “It was a bad joke, to say the least” Hoeke admitted. “And that slipped through my, the editor-in-chief’s, fingers. Stupid, painful and sucks for all concerned. The author has been addressed on it, and now I can only ensure that these terms will no longer end up in the magazine.”

Obviously, that non-apology wasn’t enough for Rihanna’s fans — or the singer herself.

“I hope u can read English, because your magazine is a poor representation of the evolution of human rights! I find you disrespectful and rather desperate!! You ran out of legit, civilized information to print!” Rihanna tweeted when she learned of the article. The “We Found Love” singer is still on tour in Europe, battling an illness that caused her to get sick during a performance.

“There are 1,000s of Dutch girls who would love to be recognized for their contributions to your country, you could have given them an article. Instead, u paid to print one degrading an entire race! That’s your contribution to this world! To encourage segregation, to mislead the future leaders to act in the past!”

Now, Hoeke is out of a job.

“I realize that my first reaction through Twitter, in which I indicated that it was a joke, has been an incomplete description of what me, and also the author of the article, meant. The term ‘n**** b****’ came from America and we solely used it to describe a style of dress,” Hoeke said in a press release.

Funny. We’ve never heard the term before. How can it be from America?

“Because of the enormous pressure through social media, I was tempted to promise amendment regarding the language in future issues of Jackie. Apart from that I also offered a rectification. I have now come to the conclusion that rectification is not the right solution. I regret that I have taken a stand too quickly regarding an article in Jackie — which moreover had no racial motive at its basis. Through the course of events, me and the publisher have concluded that because my credibility is now affected, it is better for all parties if I quit my function as editor-in-chief effective immediately. After putting my heart and soul into for Jackie for eight years, I realize that these errors — although not intended maliciously — are enough reason for leaving.”

Intentional or not, the degrading slur was still printed. It’s almost a new year… let’s take all slurs out of our vocabularies for good.