Will & Grace star Debra Messing is getting a divorce from her longtime partner. Find out how she’s dealing with the split with her new television show. 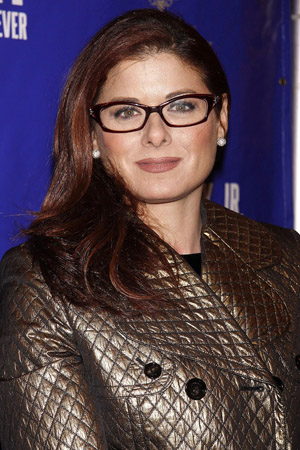 Former Will & Grace star Debra Messing has split from her husband, producer Daniel Zelman, her publicist confirmed in a statement.

Messing and Zelman “privately separated earlier this year after a 10 year marriage,” Messing’s rep told People. The couple met when they were both students at NYU, according to the magazine.

“The decision was mutual, and they remain supportive of one another and committed to raising their son as a family.” The couple wed in 2001 after eight years of dating. They share one son together, 7-year-old Roman.

“I want my child to be like my husband. He is sensitive, really intelligent, really funny… but solid. He has a good sense of perspective,” she told People in 2004.

Now, Messing is focusing her efforts on her NBC musical show co-starring Katharine McPhee: Smash. Mostly, she’s fighting back against critics who assume it’s the peacock network’s answer to Glee.

“I think Glee is extraordinary and original and fabulous,” Messing told Entertainment Weekly in May at the network upfronts. “I think Smash is similar in that there is singing, but I think that’s where the similarities end. Glee is a comedy and ours is a drama. And Glee is in a fantastic sort of elevated world and Smash is completely naturalistic, a very real look at life in New York as an actor, producer, composer, lyricist, what have you.”

“Glee does music that was already made, and we have original Broadway music being composed for us by a Tony-Award winning lyricist and composer,” she explained to EW. “So every episode there will be a new song. It’s about the making of a musical about the life of Marilyn Monroe. So the music will be focused on that project. There will be a reason for the song.”

“I think it looks so beautiful. It’s shot like a film. All the characters… there’s something universal about somebody who is unknown and has nothing and is trying to fulfill their dreams. It’s like Rocky.”

Here’s hoping she can resume her personal life with the same amount of passion she has for Smash.