Matt Damon might star as the main man in We Bought a Zoo, but Benjamin Mee really did it. Find out the sad inspiration behind the wild purchase. 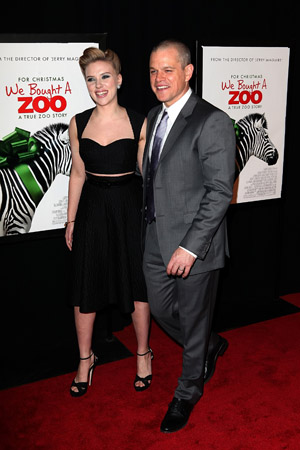 We’ve been obsessing over the new Matt Damon and Scarlett Johansson family film, We Bought a Zoo. Like many movies, it’s based on a true story — and now we’re finding out about the inspiration behind the holiday flick.

“Shhh, I’m trying to buy a zoo,” Benjamin Mee told his daughter, Ella Mee, when she interrupted him on the phone.

“No you’re not, Daddy… you’re only joking,” Ella told her father. The little girl, now 8, told the UK Daily Mail about how her family’s animal park came about.

How did the Mee family end up with four tigers, two lions, three bears, three wolves and meerkats? It all started with Benjamin’s wife, Katherine Mee. Katherine’s brain cancer was in remission when she starting buying the deteriorating zoo in Devon, England. She passed away at age 40, but Benjamin continued her dream and wrote about it in the book, We Bought a Zoo.

“I said I hoped this would be the worst news of their entire lives,” he told the Daily Mail of his wife’s fatal cancer. “That Mummy was going to die. Ella immediately cried. Milo stiffened and I could see him sucking it in. He said, ‘I don’t want to cry, Daddy. I want to stay strong for you.’ But of all the places for Katherine to be ill, we were lucky. Some animals have babies and some die… it puts it into perspective. It’s the cycle of life.”

Now, they’re relishing their story on the big screen — even if it is a little odd to see their life story play out on camera.

“I laughed a lot, as well,” Benjamin said of the film. “When Matt Damon gets chased by an angry porcupine and lands on his bum in a bed of nettles… that happened to me. It feels weird!”

Are you taking your family to see We Bought a Zoo this holiday season?