All the CGI technology and beautifully-shot locales in the world might not be able to save Terra Nova from an early extinction. 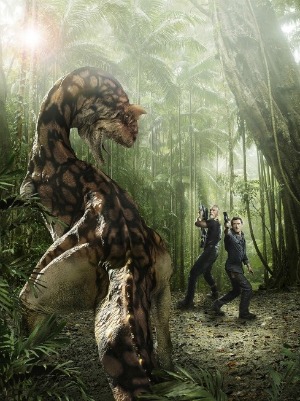 Fox is on the fence about giving Terra Nova another shot to nibble at ratings with a season two go-ahead, and we can’t blame them.

Fox was initially pleased when Terra Nova took third place in the ratings when it debuted back in September.

That wasn’t so bad considering Two and a Half Men and Dancing with the Stars took the No. 1 and 2 spots.

That was pretty stiff competition for Steven Spielberg’s CGI-heavy vehicle about time travel and saving the planet. Did we mention there are dinosaurs?

Now, months later, the show is sitting in limbo. Will the network put its faith in a second season? Can it possibly be saved?

We’re not going to argue with the fact that Terra Nova can hook a younger audience. But what about the adults?

If they can find a way to keep both parties happy, maybe the show will eventually see a larger jump in numbers, hence keeping the network satisfied.

At this point, Terra Nova seems to have come to a stalled state where numbers are concerned — not moving up much and not moving down.

According to TVLine, their season one finale, which just aired Monday (Dec. 19), brought the show up a mere 4 percent in total viewers.

That’s enough to show the network it’s at least not dropping. Then again, it’s not growing by leaps and bounds either.

It could come down to a money thing. This is a very expensive show to make. Fox needs to see the money spent is bringing in a fan base.

It’s simple math — should they put up the budget for so-so ratings?

Whatever they decide, it has to be soon. A production like this needs time for both writing and special effects — that leaves no room for error if they want to make a good showing when fall rolls around again.

Do you think Terra Nova will survive extinction?