Gerard Butler is lucky to be alive to see the final days of 2011 after having been rescued from the waters of Northern California on Sunday. 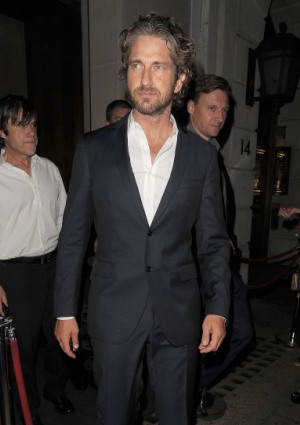 Gerard Butler felt the wrath of Mother Nature on Sunday while surfing off the west coast. The 42-year-old had to be rescued by a safety patrolman after being pulled underwater and dragged over a rocky reef by a large set of waves.

ESPN reports Gerard Butler was taken to Stanford Medical Center dazed from the ordeal, but not seriously injured. The actor had been filming scenes for Of Men and Mavericks, a biographical film about the life of American surfer Jay Moriarity, when the large waves hit the Northern California break.

“[Butler] had that 100-yard stare that surfers get after a two-wave hold-down or near-death experience,” ESPN reports. “According to other eyewitnesses, Butler was held down for a solid two waves and took four or five more on the head before being washed through the rocks on the inside, where he was finally able to be plucked out.”

The surfing location known as Mavericks claimed the life of Hawaiian surfer Sion Milosky just this past March.

In the film, Gerard Butler plays the role of Rick Hesson, surfing mentor to Jay Moriarity, who rose to fame in the surfing world at age 16 when his wipeout at Mavericks was caught on camera and later made the cover of Surfer magazine. The story reportedly revolves around Moriarity’s “quest to ride the iconic Northern California break known as Mavericks, where winter swells bring in treacherous waves the size of five-story buildings.”

Known as a soul surfer (one who practices the sport for sheer pleasure rather than for fame or commercial reasons), Moriarity died in 2001 at age 22 in the Indian Ocean, drowning in an apparent diving accident.

Of Men and Mavericks is expected to be released in theaters Oct. 26, 2012.