Britney Spears’ father still controls her purse strings. Will that continue when she marries Jason Trawick? Find out the surprising answer. 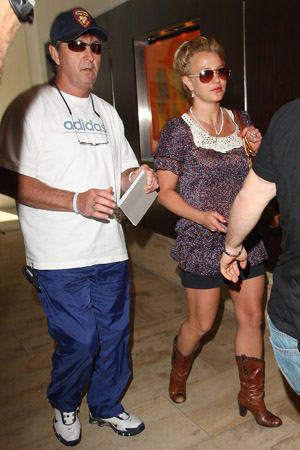 Britney Spears’ father, Jamie Spears, is the person who stopped his daughter’s downward spiral and became her conservator. The elder Spears is still in control of her financial life, which begs the question: What happens now that she’s engaged to longtime boyfriend Jason Trawick?

“Britney can do anything she wants under the conservatorship, but that doesn’t make it legal. If she did get married without her dad’s permission, it would be a legal nullity, as in null and void — as in an illegal marriage,” Beverly Hills-based Divorce Attorney Mark McBride told FOX411’s Pop Tarts.

“She would first have to get dad Jamie’s permission. In the face of a ‘no’ from dad, she would then have to ask a court to override her dad’s decision, which almost surely wouldn’t happen.”

We could see something like that happening if her fiancé was someone like Kevin Federline, but Jamie is said to like Trawick. However, that still begs the question: Why does Jamie still have control over Brit Brit’s finances? It might be because of lawsuits.

“A conservatorship is a court-ordered plan which is put in place to protect people from themselves. It can be put in place if the person is acting erratically, making very bad financial decisions, has mental health issues such that their day to day functioning is impaired and affected, has drug problems, has a sense of being totally overwhelmed by a very busy or stressful life, or if the person presents the risk of hurting themselves or others,” McBride told Fox News.

“If the conservatorship is lifted, Britney has to face her legal woes. Right now, she’s getting her cake and eating it, too. She’s able to generate tons of cash but not have to face the legal music.”

McBride was referring to Sam Lufti, Britney’s former manager and the one accused with helping advance her breakdown. Lufti is suing Britney’s mother, Lynne Spears, for defamation.

“If the conservatorship is ended, Lutfi’s lawyer will seek to depose her,” McBride added. So, it might end up that Trawick gets control when they marry.

If that wasn’t enough, Brit’s first husband, Jason Alexander, told US Weekly that he doesn’t think the newly engaged couple’s marriage will last.

“If you look at all the pictures between [Spears and Trawick] there is no connection,” he told the magazine. “They look like they are going through the motions. It seems like an answer to the court thing.”

You might remember that Alexander went to a tabloid with tapes he claimed were conversations with Britney. In the tapes, a Britney soundalike accuses Trawick of abuse. Maybe Alexander still holds a flame for his ex and is just upset over her engagement?

“Sort of a nice way to sew it all up, she marries her handler,” he quipped. “That way she always has someone controlling her. It’s sort of sad.”

Hey Jason: Get over it.

Do you think Jamie Spears should end his conservatorship over Britney Spears?