Kim Kardashian is looking forward to a fresh start in 2012. Find out what she’s calling Kris Humphries in a new Twitter post. 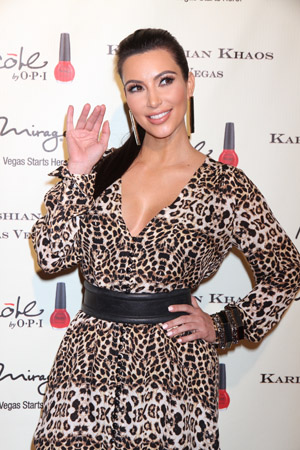 Kim Kardashian finally admitted what everyone already knew: Her 72-day marriage to Kris Humphries was a serious mistake.

“Maybe our mistakes r what make our fate,” Kardashian tweeted on Monday. “W/out them what would shape our lives? Perhaps if we never veered off course we wouldn’t b who we are.”

The star of Kourtney and Kim Take New York is also looking forward to starting fresh in the new year. “I’m really thinking that 2011 was a lot of learning lessons,” Kardashian told US Weekly at the opening of Kardashian Khaos boutique in Las Vegas.

“I’m just excited for the New Year and the new me.”

Will the New Year equal a new guy? The reality star is rumored to be hooking up with hip hop superstar Kanye West.

“I’m not looking,” she explained. However, we don’t think it’s ever very far from her mind. “I believe in love… always.”

There is one person who could keep her down in the new year: Humphries.

“Kris has become so two-faced. In the past month, Kim has gotten to see a side of Kris she didn’t want to believe existed. At first Kris agreed to make a joint statement about their split and then he changed his mind at the last minute,” a source told the magazine.

“Since then, he has gone out and done everything he had promised not to do,” the source, aka Kardashian’s publicity team, continued. “He tried to sell stories to people that made Kim look like a monster and then was surprised that she was hurt. It was sick.”

Not so, says a source close to the NBA baller. “Kris is sick of all the negativity. He just wants the chance to set the record straight once and for all.”