Backstreet Boy Howie D. recently chatted with SheKnows about his solo debut Back to Me. The album has allowed him to branch out, hit the road and tour with one of the biggest acts around — Britney Spears! 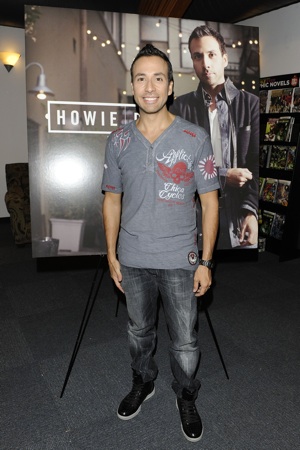 There’s a new solo star in town and his name’s Howie Dorough. Dorough, better known as Howie D. from the Backstreet Boys, recently released his debut album Back to Me.

On Monday, we chatted with the singer about stepping out, and hitting the stage with fellow pop icons Britney Spears and New Kids on the Block.

“One good thing about being in my group is that we’ve always encouraged,” said Dorough. “Nobody has ever felt awkward about allowing each other to do solo projects.”

There’s no bad blood here. The Backstreet Boys are all for one, one for all.

“It’s something we all knew that God-willing, if Backstreet Boys took off for us, we would use it as a platform to help each other. And that’s what we’re doing,” said the singer.

A solo star is born

When Dorough decided to record his album, he wanted it to represent both his past and present.

He explained, “I definitely took my time to craft it into something that I felt would really be able to represent me and where I am in my headspace. It kind of reflects things coming full circle back to me as a solo artist, which I started off as many years ago.”

Dorough recently performed on the South American leg of Britney Spears’ Femme Fatale tour. The singer told SheKnows that he loved working with his old labelmate.

“I have lots of respect for Britney; I’ve known her for many years now,” said Dorough. “Starting off in the same kind of camp with Johnny Wright [our manager], and the Jive family. I’ve seen her and followed her career through ups and downs. I really respect her not only as a person but also as an artist.”

Touring is a family affair

“She’s definitely a family person, just like me,” revealed Dorough. “She had her whole family out there with her. She had her mother, her father, her kids and her boyfriend, who’s now her fiancé. She really creates a good family environment.”

He continued, “Normally when I’m on the road I try to, when I can, take my family out with me. On this trip, I actually didn’t have my wife and my child. But in the States I always do.”

Backstreet Boys and New Kids on the Block are a match made in music heaven. The pop legends joined forces in 2011 for their NKOTBSB tour, an event that was born after an impromptu show.

“When they had their comeback tour a couple years ago, coincidentally we were on tour at the same time,” Dorough told us. “We were going through New York, and I think Donnie [Wahlberg] called over and said, ‘Hey, do you guys want to come up on stage with us and sing? We want to shock some fans.’ We were like ‘Sure! Why not?'”

Both groups were genuinely surprised at the audience’s overwhelming response.

“They kept on requesting us to do a tour and we said, ‘Why not?'”

After a busy 2011, Dorough is excited to see what 2012 will bring. On Dec. 31, he’ll ring in the New Year doing what he does best — performing. The singer is heading to Canada!

Dorough confirmed, “The next thing I’ll be doing is actually going to Toronto. I’ll be there at the Nathan Phillips Square bringing in the New Year up there.”

Back to Me is currently available in stores and on iTunes