American Idol alum David Archuleta has announced that he’s putting music on hold to embark on a two-year Mormon mission.(The sound you just heard was a collective scream of sorrow from a grief-stricken generation of tween pop fans.) 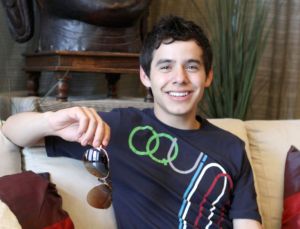 In the words of Ryan Seacrest: Archuleta out!

Former American Idol finalist David Archuleta is taking a two-year break from the recording industry to embark on a religious mission for the Mormon church.

The baby-faced crooner, a native of Salt Lake City, made the emotional announcement in front of the hometown crowd at his My Kind of Christmas show on Monday night.

“I would like to make a special announcement that I’ve chosen to serve a full-time mission,” Archuleta said, fighting back tears as the audience cheered.

Missionaries for the Church of Jesus Christ of Latter-Day Saints are usually around 20 years old and can be sent anywhere in the world to serve for two years. Their time is completely devoted to spreading the church’s gospel. Mormon missionaries are not allowed to date and must adhere to a strict dress code and rules of conduct.

“It’s not because somebody told me that I was supposed to do it, not because that I no longer want to do music anymore, but it’s because it’s the feeling that I felt that I need to do next in my life,” the “Something ‘Bout Love” singer explained.

“It’s just the same feeling that I’ve always followed, tried to follow in my life. It’s the feeling that has allowed me to have the opportunities that I’ve had, the challenges that I’ve overcome and the blessings, too,” David added.

Archuleta, 20, is best remembered as runner-up to Idol champ David Cook during the show’s seventh season. David warmed the hearts of A.I. enthusiasts enthralled with the triumphant victory he made over the vocal paralysis that silenced his signature singing voice in 2004.

Boyish good looks and an angelic set of pipes never quite translated into stellar album sales for the singer/songwriter, however. It was those lack of receipts that cost David his recording contract with Jive Records last year.

Archie, as he is affectionately known to fans, was dropped by the imprint after his sophomore album, The Other Side of Down, failed to achieve the platinum status of his self-titled 2008 debut.

Archuleta was the subject of the 2010 tome, Chords of Strength: A Memoir of Soul, Song and the Power of Perseverance, a tale of the heartthrob’s family life growing up in Utah.