A woman who says that Justin Bieber is her baby daddy still plans to go forward with her claim, despite a mountain of evidence against her. 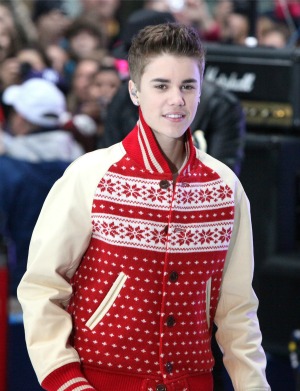 Mariah Yeater says she may have dropped her lawsuit against Justin Bieber, but her paternity claim is still on — despite the mountain of evidence that her ex-boyfriend is really her baby daddy, not the pop star.

“I am still pursuing the paternity claim through my Chicago attorney Jeffery Leving and my Los Angeles attorney John Carlson but outside of court,” Yeater told the Chicago Sun-Times. “I dropped my lawsuit, but never my claim. I still definitely want a DNA test and I want to refile my paternity case.”

“I do believe he is the father.”

Yeater reiterated her claim that she had sex with Bieber in the bathroom at the Staples Center in Los Angeles on Oct. 25, 2010 — and that despite text messages pointing to her ex-boyfriend Robbie Powell being the real dad, that just isn’t the case.

“I know him,” Yeater said. “He is not the father and he’s locked up and out of the picture.”

Powell is currently in a San Diego jail after being arrested in November on drug and burglary charges.

So whatever happened with that DNA test? Bieber supplied a sample — but has it ever actually been tested?

“Bieber’s counsel has not provided me documentation supporting that the DNA test occurred,” said Yeater’s attorney Jeffery Leving. “Bieber’s counsel hasn’t told me where Bieber’s alleged DNA is secured nor has provided information substantiating the chain of custody and protocol utilized in the claimed DNA collection and testing.”

“If negotiations with Bieber’s counsel does not result in DNA testing of everyone under mutually agreeable and controlled conditions, then the legal proceedings will likely need to be refiled.”

The case does present one problem for the lawyer, though.

“Even my daughter is a Bieber fan, which is making my case not popular at home,” Leving added.

Bieber’s camp has not commented on the matter since the DNA sample was supplied, but has said previously that when (not if) it comes back negative they plan to sue Yeater for defamation of character.