Attention Batman Fanatics: The moment you’ve been waiting for has finally arrived. The Caped Crusader returns in the first full trailer for the upcoming Batman finale, The Dark Knight Rises.

The trailer for the highly anticipated final installment of Christopher Nolan’s Batman trilogy was released on Monday. 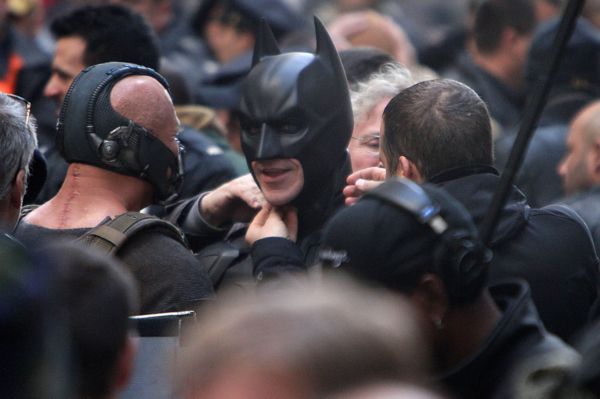 After the great box office successes of 2005’s Batman Begins and The Dark Knight in 2008, the last sequel, opening next summer, is expected to be one of the biggest films of the year.

The trailer begins with a boy hauntingly singing at a football game and ends with terror engulfing the stadium, hinting at an action-packed spectacle for Gotham City’s final fight between good and evil.

In the teaser, we get our first look at Hathaway as a surprisingly intense, nasty Catwoman, purring fighting words about a “storm coming, Mr. Wayne” into Batman’s ears.

The wrath of the new Darth Vader-style masked villain Bane is felt as he attacks Gotham City and fights the Caped Crusader.

There’s also an emotional moment between Bruce and his longtime butler Alfred, hinting at the danger Wayne is about to face.

Gary Oldman returns as Commissioner Gordon. Michael Caine is back as Alfred. Morgan Freeman reprises his role as Lucius Fox.

What do you think of the trailer? Share your thoughts in the Comments Section!